We decided to finish up a couple of projects on the truck this time. Two projects were more on the functional/visual front. The first was to replace the front headlight modules. Even though the original headlight modules looked pretty decent during the day, walking by them at night when the lights were on you could see a lot of internal yellowing and small cracks. Here’s what one looked like: 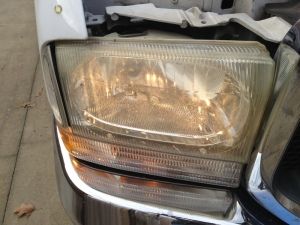 I don’t think you’ll have much trouble seeing the difference new modules made. Here’s one installed: 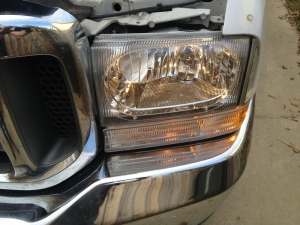 Malcolm decided that if the headlights were going to be replaced, might as well use genuine Ford parts instead of some questionable quality items from overseas. These modules were ordered from Tousley Ford’s online parts depot. If you were to look on that site, it would list the headlight modules at $147 each, but they actually ended up being $101 each. As an extra bonus, they ship with new headlight bulbs (about $11 each at the parts store).

Another big project was to re-upholster the front seats. The seat covers were purchased from The Seat Shop online. They make all kinds of original equipment quality replacement upholstery for older vehicles such as ours. Ford no longer carries anything similar for our vehicle. We were very pleased with the color match and quality of the seat covers. The two front seats were about $800 for the upholstery. Malcolm did the work himself. It took about 4 hours, total, to do both seats.

Here is an example of what the side bolsters of the original seats were starting to look like:

The driver’s seatback had started splitting, as well, but no pictures of that here. Here is the entire passenger seat on the floor of the trailer, ready for surgery. 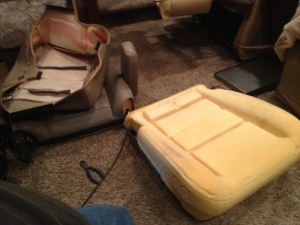 And here are both seats complete and re-installed in the truck.

The seats are much firmer and the leather is more grippy than the old, slick leather. That should keep Val from sliding out of her seat when we go around corners or stop quickly.

We’ve done a lot of other routine maintenance type work on the truck this fall. You can see a full list of all the work and items we’ve done to the truck on the Truck page. The only remaining planned item is to have the transmission rebuilt in January.

One other trailer item we did was to install a weather station. We found one at Bass Pro Shops with all of the outdoor functions built into one unit. Malcolm mounted the mounting post included with the unit on the horizontal portion of the ladder on top of the trailer using a pair of u-bolts. Here’s a picture of the unit mounted up top.

The twisty screw thing sticking out is the set screw to keep the unit from rotating. When we go to pack up and move, Malcolm can climb up the ladder, twist the screw and lift the sensor unit off the post and bring it inside. Once we set up at our destination, it’s a simple matter of plopping it back on the post and tightening it down (using the compass on the phone to aim the unit pointing north-south).