Since we decided to stay here an additional day, we got a lot of little things done. First, Malcolm pulled an empty LP tank from the trailer and loaded it in the truck and headed to the office at 8:00 am. First, he asked if we could stay another day and it was not a problem (by 9:30, however, the place was booked, so we had good timing). Once the two-day stay was paid for, along with a refill for the LP tank, Malcolm returned to the trailer and hooked the tank back up. Here’s a picture of our site. The sun was shining today, though it was windy and cold. 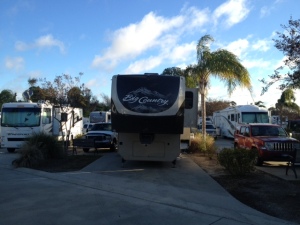 We hopped into the truck and headed down the road to Hobby Lobby to get a couple items that Val needed for a crochet project. While there, Malcolm found a nifty tissue box cover with a horse/western theme. Extra bonus, it helps to weight down the tissue box and tidy up wires in the corner next to the TV. 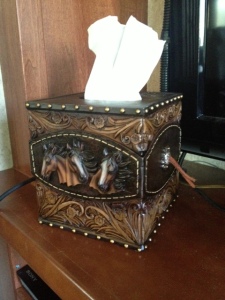 After Hobby Lobby, we found a Winn-Dixie grocery store and picked up some items on our grocery list. On the way back to the campground, we pulled into a Pennzoil oil change place to get the oil changed on the truck (it was slightly past due).

Waiting for the oil to be changed.

Malcolm thought it rather humorous that the technician recommended a transmission fluid change, given that we just had a newly rebuilt transmission put in two days before. When he mentioned that, the technician simply indicated that, based on the mileage, it was probably due.

Just as we were getting to the campground, Malcolm spied a self-serve car wash and pulled in there to spray off the majority of the road grime we picked up in Arkansas during the nasty weather. Our trailer is a mess, too, but doesn’t look as bad as the white truck did. With the truck all cleaned up, we pulled back in to our pad, unloaded groceries and Val started dinner in the crock pot. Malcolm cleaned off the front of the door side slide and put on the US states sticker and the states we’ve visited so far (special thanks to Michael and Kelly Barnett for giving us the idea where to mount this).

We loaded up our laundry and took care of that at the campground laundry facilities, which were top notch. Total cost was about $12 (four loads).

Once back at the trailer, we did some clean-up. Malcolm checked on the gas part of the water heater (it didn’t seem to work correctly when we first got the trailer, and still doesn’t, so we’ve been using the electric part, instead). We also tried to get the front jacks to level out the trailer better. It appears that the off-door side of our trailer is heavier than the door side, so even on a fairly level pad, it tilts to the left. Not sure if there is anything that can be done about it (other than always putting a leveling block on that side) or not. It is added to the list for the dealer to look at tomorrow.

After dinner, we found a local shopping mall and walked around for a while. The only thing we bought was some frozen yogurt. After returning to the trailer, we made some muffins from some mix we bought at the store. Malcolm sat down to his computer to try to figure out how to get our new domain name (travelingtalleys.com) to point correctly to our blog. He finally got that worked out late, so if you had problems finding us today, that’s why.

Packing up in the morning and heading to the dealer. Hopefully they can get a couple things fixed for us.