This weekend continues to be perfect, weather-wise. The official high temperature today, according to the Big Country Weather Station, was 80 degrees. It stayed in the upper 70’s through the late afternoon into sunset. We used the power fan in the kitchen to pull air through the trailer instead of using the air conditioner. 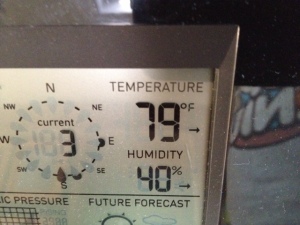 After we got home from church this afternoon, Malcolm took the truck over to an adjacent camp site and gave it a good washing. It was the first time it has been scrub-washed this year. We have sprayed it down a couple of times at coin car washes to knock down the majority of the dirt. But it never hurts to give it a little extra TLC when possible. 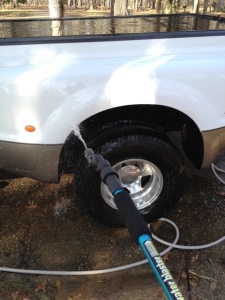 All done and drying off.

Since all the washing equipment was out, Malcolm went ahead and washed the back of the trailer as well as the front cap and the lower portion of the front, where dirt, soot and debris get thrown back from the truck. I think we would benefit from some big mud flaps.

After all that washing, we decided to cook out for dinner, so off to the grocery store to pick up some ground beef, a couple ears of corn and a few other items we needed. We had “steak burgers”, corn on the cob and macaroni and cheese with broccoli. We ate in the new screen room thingie.

Closeup of the screen room thingie.

Looks like rain and cooler temperatures the next couple of days, so we put things away in preparation for less than favorable weather. If the long-term forecast is accurate, we’ll have another nice weekend next weekend. We won’t complain.