We left Adairsville this morning around 9:00 AM and headed up I-75 towards Kentucky. It was a generally uneventful trip. We were curious how the truck would handle our heavy trailer over the hills in north Tennessee. It did great.

There are two long, hard pulls going northbound. The first one was 55 mph all the way up. On the second one we were on track to do the same, but had a big truck get stuck next to us unable to pass. Malcolm let off to let the truck over in front of us, dropping speed back to about 42 mph. Once going that slow, it was tough to gain any of that lost speed back, so we followed the big truck all the way up doing around 45.

We arrived in London, Kentucky around 3:00 pm and checked into the campground, paying for five nights. We plan on leaving out on Monday, April 1 to head up to the Kentucky Horse Park (for another five nights). The nice thing about the campground here is that we are less than 1 mile from Malcolm’s brother’s house.

Malcolm’s brother David, his wife Marsha and their daughter Jazzlyn came over this evening and took the tour of the trailer. Jazzlyn wanted to spend the night, but has school tomorrow, so that was a no-go. We had a great time catching up with them and plan on hanging out, visiting and even doing a little traveling with them on Saturday (just in the truck) to visit more family a couple hours north of here.

Here’s a picture of the trailer all set up on our site. 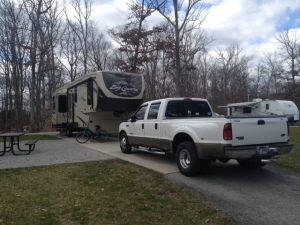