We ran a couple of errands this morning after breakfast. First, a stop at the post office to drop off a couple of packages and mail some letters and postcards. After that, we found the local Goodwill where Val found four more blankets to donate to the baby blanket thing going on in June at the Heartland rally.

After Goodwill, we decided to head down to Corbin, Kentucky to eat lunch at what is essentially the first KFC restaurant – Sanders Cafe. This was the place where Colonel Sanders got his start. It has been refurbished inside to look like an older restaurant and has lots of memorabilia from the early KFC days.

Outside of Sanders Cafe.

Not seen just to the left of the picture above is a regular KFC restaurant built onto the end of the building. The standard counter and menu board like you would find in pretty much any KFC across the country was present here, as well. We ordered lunch and sat down to enjoy after we had looked over all the museum stuff inside. 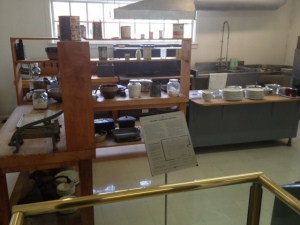 Val had noted that the Sanders Cafe was listed with RoadsideAmerica.com – the guide to uniquely odd tourist attractions. Of course, they have an app and we had it downloaded while eating lunch. Malcolm noted a couple other attractions listed in nearby (15 miles) Barbourville, Kentucky, so we headed there after lunch.

We found one of the two listed attractions. Apparently, and sadly, the giant chicken is no longer standing at a gas station along US 25E. We did briefly swing by the tiny church, listed as being the smallest in the county at 10′ x 12′.

After our trip to Barbourville, we decided to return via KY 11, which winds through a long valley alongside a creek and a railroad track. All three run pretty much parallel for miles, though the train track and the road took turns crossing over one another. We ended up in Manchester, Kentucky where we hopped on the Hal Rogers parkway (formerly the Daniel Boone parkway) back to London.

Short side trivia note. Malcolm’s job in the late 1980’s when we lived in Lexington, Kentucky involved programming the computers and installing them in the various toll plazas on the turnpikes in Kentucky. The Daniel Boone parkway was one of these. Kentucky removed the last of their toll booths around 2006, so the systems are no longer in use. But it was a nice little trip down memory lane, er, turnpike.

We got back to the trailer, grabbed cameras and headed down to the mill at the entrance to Levi Jackson park. The intent was a short photo walk, but Malcolm quickly found that his camera’s memory card was back at the trailer, so the camera went back into the truck. Val took several pictures which we’ll put on the computer and sort through later. In the meantime, here are a couple that Malcolm took around the mill. 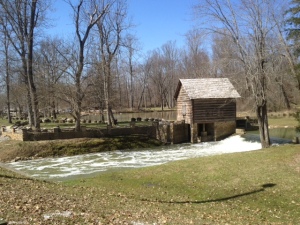 The mill house is a re-creation of what one would have looked like. It makes for a nice looking entrance into the park. A nearby road has been blocked off and re-purposed as a walking and biking trail which is nice.

The campground is slowly filling in anticipation of the upcoming holiday weekend and probably due to spring breaks, as well. When we checked in on Wednesday, there were literally four other RVs here. There are now a couple dozen (they’ve been rolling in all day). Should be interesting to see how full the place gets over the weekend.