This morning was all about trailer maintenance. We had items we wanted to take care of and one we hadn’t anticipated. First up was to trim the decorative plastic cover around the trailer hitch. We’ve pulled the truck forward a couple times with the tailgate closed and cracked or broken the plastic a couple times.

Malcolm bought a cut-off wheel and chucked it in his cordless drill. After marking where he wanted to cut the plastic with masking tape, it was a fairly easy job of just grinding through the plastic. A little trimming up with a razor knife and he was done. 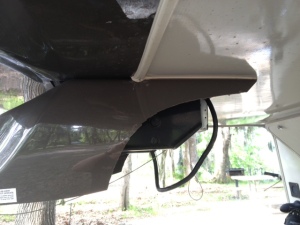 With the hitch out of the way, the next project was one we had seen on the Heartland Owners’ Club forum. Taking a foam knee board and cutting it to size to block the hole in the bottom of the Universal Docking Center (where the water and cable TV come up from underneath). This helps prevent critters from wanting to crawl up inside this area from below. Note that it is a decorative stripe pattern, to boot.

Next was to replace the perpetually leaky faucet “Y” splitters with higher quality units from Home Depot (all the previous ones purchased at WalMart or other places just seem to not hold up or are difficult to impossible to seal enough to prevent drips and leaks.

Additionally, Malcolm had found some hose quick disconnects he wanted to try out. They work really well, so he put one at the output of the regulator and another on the input to our water filter (inside the UDC) and matching ends on the water hose. Should make hooking up and unhooking the water a lot less prone to causing leaks.

One of the brass “Y”‘s and the tag from the quick disconnects. 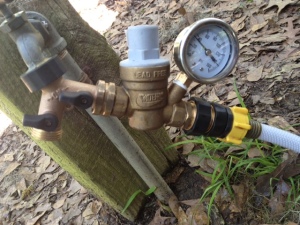 New Y, regulator, female and male quick disconnects hooked up to the hose.

While Malcolm was walking around the trailer and just giving it a once-over, he noticed that the back wall on the outside looked a little like maybe it was de-laminating (which might point to water intrusion from the back of the roof). He climbed up the ladder on the back to press on the areas to see if they felt soft (they didn’t). While up there, he found a hole knocked into the corner cap at the back edge of the roof. He taped it up with duct tape for now. We might have Heartland look at it during the rally up in Indiana in June.

After the trailer maintenance, we went up to the house to mow the lawn and tidy up around the house a bit, as well as pick up a package and some mail. Then, back to the trailer for the rest of the day. We rode bikes around, ate dinner out on the picnic table and generally had a nice day.