This morning we hooked up at Gulf State Park and rolled out about 9:00 AM. We said a few final goodbyes to the few remaining stragglers from our group. We then headed about 30 minutes up the road to the Goodyear store in Foley, Alabama to get our new tires put on. When we got there, they found out that they never got our tires in. They found a set about 30 minutes away and dispatched an employee in their truck to go retrieve them.

Parked at Goodyear waiting for tires.

Once they got the tires, they got right to work replacing them. 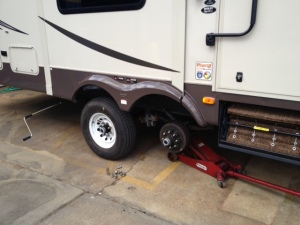 Huge glob of rubber inside the flat tire.

First tire put back on. 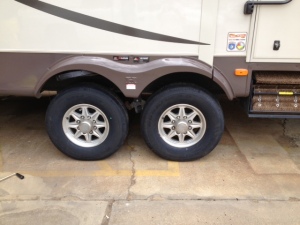 Both tires replaced on the right side.

We were rolling out of the lot about 1:00 PM with our new tires. We kept two of the old ones for a friend back home to use. We also still have the original spare tire back up under the trailer. Eventually, we’ll order another aluminum rim from Heartland (relatively inexpensive at around $125 according to another club member) and put a Goodyear tire on it, as well.

We stopped just up the road at the Camping World in Robertsdale, Alabama to get drinks out of the back of the trailer and to pick up a couple of items we needed from there. Then, we headed up to I-10 and on west as far as we felt like driving, which ended up being around Hammond, Louisiana.

We stopped at Yogi Bear’s place for the evening, since it is a Passport America campground (1/2 price). The office was closed, but a notebook out front guided you to the empty spots (there are plenty). We called the number on the book, just to check, and they said to go ahead and park and pay in the morning. 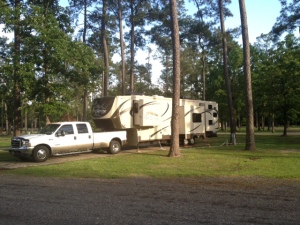 Spot P77 next to the water.

After a microwaved Lasagna dinner, Malcolm set about to installing the new grab bar on the screen door to complement the recent addition of the plexiglas. It gives you something more substantial to grab onto when closing the door.

Malcolm also put a bungee cord under the door side living room slide to see if it will hold up the cable raceway better. When the slide is in, the raceway hangs precariously close to the rear tire on that side. We’ll see if it works tomorrow when we retract the slide. 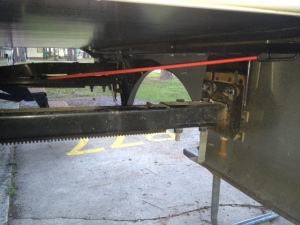 After dinner and modification installation, we walked around the park for a bit, stopping to get pictures with Yogi. Tomorrow, we’re heading to Lafayette, Louisiana for a few days to visit friends there and do some sightseeing. 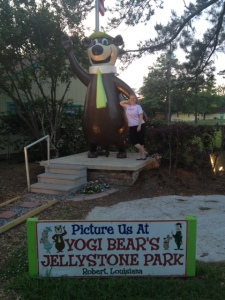