This morning we slept in for a while. Malcolm had a sinus/migraine headache. We didn’t have anything we needed to do or anywhere we needed to be until 11:30 when we were going to meet Malcolm’s brother and his family for lunch. They had another dance recital this afternoon and wanted to have lunch with us before they headed to do the dance thing.

We ate lunch at a restaurant located at the regional airport. It was pretty good food. After lunch, they headed to the dance recital and we headed back to the trailer by way of a local produce stand. We bought several vine ripened tomatoes and several Georgia peaches.

After we got back to the trailer, we relaxed for a bit then decided to go play a round of miniature golf at the campground course. It is a pretty nice course, fairly well maintained. Malcolm took his own putter (it is new and he hasn’t used it yet). After about 7 holes, it started to rain, but it was a brief shower. We were back on the course and finished our 18 holes. Malcolm won, but Val was ahead for the first several holes. 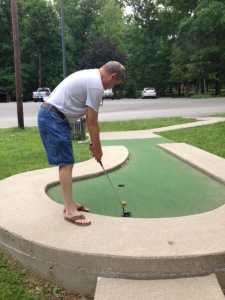 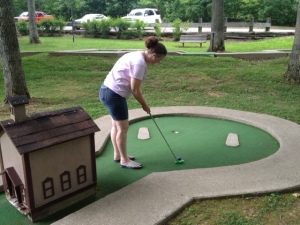 After the round of golf, we treated ourselves to an ice cream treat at the 19th Hole (i.e. the campground store). We ate our ice cream on the way back to the trailer, where we went to relax some more while we waited for Malcolm’s brother to call when they got back from the recital.

Malcolm decided to do a little inspection walk around the trailer. It is fortunate he did. He noticed that the left rear tire looked a bit low. He grabbed his pressure gauge from the truck and when he bent down to start checking the air pressure, he found a nail sticking out of the sidewall of the tire. These are the new tires we just had put on about a month ago.

As expected, the air pressure was around 65 PSI, down from the 100 PSI or so that was in it. Back inside the trailer, Malcolm checked to see if there were any local Goodyear stores he could contact (it was near 5:00 PM). The only one he got hold of was the local WalMart Tire and Auto Center. The gentleman there indicated that they didn’t have adequate patches to fix the commercial truck tires we are using on the trailer, but he did recommend we stop by the truck stop just south of town when we leave. The mechanic there should be able to fix us up.

We decided the game plan was to buy a jack sufficient to lift the trailer axle and put the spare tire on when we are ready to leave on Monday, then stop by and have the problem tire fixed, then hopefully have the shop there put it back on and stow the spare back up under the trailer. To that effect, we went to WalMart and purchased a 12 ton bottle jack and an extendable lug wrench that looks like it will suffice to loosen and tighten the lug nuts on the trailer. We’ll see how that all pans out Monday morning when we head out.

After getting back from purchasing the jack and lug wrench, we decided to fix dinner since we hadn’t heard from Malcolm’s brother yet. We ate a light dinner of vegetables, which was a welcome change from the various heavy dinners we’ve had as of late. One of the vegetables was one of the tomatoes we bought today. Yummy!

Malcolm’s brother called after dinner and they were going to come out to the trailer to visit for a bit. He had found a few more of Grandma’s diaries so Malcolm can fill in some more of their travel history on his spreadsheet. He is still missing about 6 years of books. We think they might be at our house somewhere. We will check that when we get home. We handed off the milk crate full of diaries that Malcolm had already been through to his brother for safe keeping.

Tomorrow’s plan is early church service with Malcolm’s brother’s family, then we’re heading up to Lexington to have lunch with Val’s sister and her family, then our niece’s afternoon graduation ceremony.

One thought on “A Round of Golf and A Problem”