We got up early this morning, around 6:30 am. We had the trailer all closed up but not hitched up by 7:30 am. Malcolm took off the wheel with the tire with the nail in it and we left the trailer on the jack. 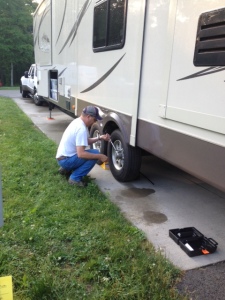 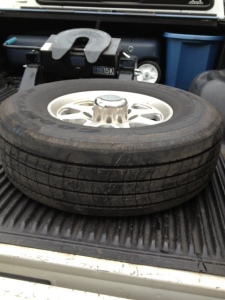 Into the back of the truck.

We headed to the nearest Goodyear store to see if they could fix our tire. They indicated that they couldn’t, since the nail was in the sidewall. They didn’t have a replacement tire available until the next day, but we had to be on home.

Malcolm had talked to the WalMart tire and auto employee on Saturday who recommended the truck stop tire store a few miles down the road, so we traveled there to see if they could fix or replace the tire. They wouldn’t fix it and didn’t carry tires in our size. We decided to just mount the spare on the trailer and drive home that way, leaving the bad tire in the back of the truck. 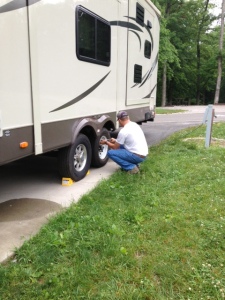 Putting the spare back on.

Malcolm needed to put more air in the spare (it was sitting at about 65 PSI and should be close to 80) as well as the other tire on the left side (it was about 4 PSI low). He found that our air compressor won’t suffice to put more than about 88 PSI of air into the newer tires (we run them close to 100 PSI). We might need to look into a sturdier compressor. He got the tire as close as he could (88 PSI), which happened to be where the other new tires have settled.  Once we get things sorted out and a new tire mounted as well as a better compressor, we’ll pump everything up to around 100-105 PSI. 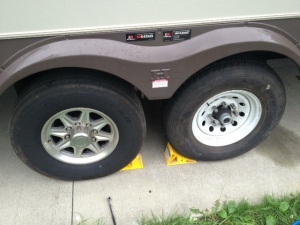 Pumped up and ready to roll.

We hit the road about 10:00 EDT with a 400+ mile drive ahead of us. It was easy driving. We stopped at a rest area midway between Knoxville and Chattanooga, TN to eat lunch on a picnic table. There were several others doing the same thing (some were RV’ers). 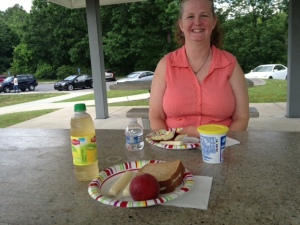 A fuel stop and a couple of breaks along the way and we were in Wetumpka at our home campground by 5:30 CDT. We set up, paid for our site, turned on the A/C to cool down the trailer and headed out to eat dinner. After dinner, we met our son at WalMart to get our mail and Val’s car. Val ran our son back home and came on out to the campground. Malcolm fueled up the truck and bought a fuel filter for tomorrow. He will drop the truck off to have it installed as well as get the oil changed and order two more trailer tires (one for the spare and one to replace the one with the nail in it).

Just east of Birmingham, Alabama on the way home today, the truck passed the 200,000 mile mark. When we bought it a little less than two years ago, it had 145,000 miles on it. 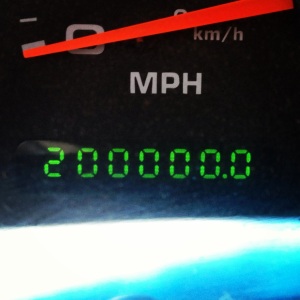