This morning we awakened to the sound of our surge protector chattering because it didn’t like the incoming power. The sound of the fan in our bedroom slowing down confirmed the issue. Shortly thereafter, it kicked completely out. Malcolm got up and checked the remote display on the unit that indicated only about 60 volts coming in.

Since this was the first time we’ve had the unit kick out, Malcolm wanted to make sure it wasn’t some kind of wiring fault in the trailer, so he headed out to the pedestal and verified that the voltage at the 30 amp outlet was varying. He plugged back in and everything kicked back on, but only about long enough for Malcolm to make his morning coffee. Once it kicked out again, Malcolm went ahead and stowed the power cord and we all got up to get ready to leave.

We got everything packed up and the trailer hooked up to the truck. Just as Malcolm was walking up to the truck to get in to drive away, the rain started coming down. Talk about timing. Fortunately, the rain was just a brief shower here and there, so nothing major that we had to drive in. We left Cave City and headed on up to Louisville, where we met Val’s sister Anne briefly at a Meijer parking lot. She had a couple of boxes of things for us to take to our daughter out in Washington state.

We hopped back on I-65 and headed north into Indiana. We stopped at the first rest area in Indiana and had lunch. We also took time to do a Skype call with our daughter, Elizabeth, and oldest grandchild, Violet. We had tried to Skype with them last night to surprise our daughter with the fact that our son, David, was traveling with us to see his sister, but that didn’t work out, so he talked to her on the phone last night to spring the news.

Skyping with Elizabeth and Violet with David in the background.

We rolled on up through Indiana past Indianapolis (very light traffic, glad we were coming through on a Sunday afternoon). We decided on the White River Campground after our Heartland friends John and Rana Krussow stayed here the night before. We had a little laugh over the name of a nearby golf club – Purgatory Golf Club. The website makes it sound really interesting. From what you can see from the road, it looks like a really interesting course. 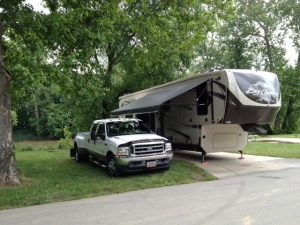 Our site on the White River

Once we got set up, Malcolm called his Uncle David and Aunt Judy, who live in nearby Noblesville. They came out to the park and got the grand tour of the trailer. After chatting a bit, we went out to eat at Perkins restaurant, then said our goodbyes. We stopped by a nearby Kroger as it had the cheapest diesel fuel in the immediate area (3.71/gallon) and filled up the truck.

Interestingly, the last three fill-ups have shown that we’re averaging about 10.3 MPG. We typically have counted on about 9.5 MPG. Not sure if the new trailer tires running at 105 PSI contributed all of that or not. We won’t complain about better fuel mileage, for sure.

Tomorrow, we head on up to Goshen and the Heartland Owners Club rally. Looking forward to seeing lots of friends and meeting many more.