We got up this morning and took our time pulling out of Sheridan. We drove nearly 400 miles today – more than we expected to originally. We’re just ready to visit those grandchildren. We are expecting to arrive in the Seattle area on Saturday. Given that, we’re going to travel as far as comfortable tomorrow so that we won’t have so many miles to travel on Saturday.

Today was all about hills. Part of the time, on the east side of the Rockies, we had a pretty stiff breeze tossing us around and slowing us down. Once we climbed over a ridge of mountains, the wind died down and it was a pretty easy drive as far as weather conditions. It is pretty hot up here, though. The truck thermometer was reading in the high 80’s to low 90’s the entire trip. The engine fan was working overtime between it being hot and us climbing so many long, steep grades. 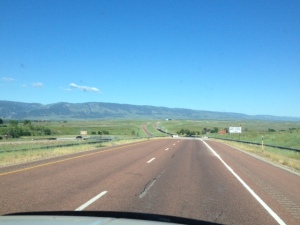 Scenery along the way 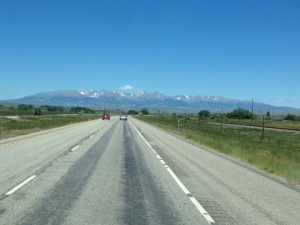 All in all, it wasn’t a bad drive up and over the Rockies. We descended into Butte, Montana, which was where we had decided would be a good stopping point. It was only about 3:00 PM at that time and Malcolm indicated that if he could get out and stretch a bit, he could drive a bit further. We pulled into a Safeway parking lot in Butte and checked out campgrounds out ahead and decided on Deer Lodge KOA at about another 45 minutes from Butte.

We dropped into the Safeway and picked up steaks, potatoes, onion and bell peppers to grill out dinner once we got to the KOA. We pulled in around 4:30 and were assigned a nice pull-through site. While Val got things turned on and settled inside the trailer, Malcolm got the outside kitchen set up to grill out. 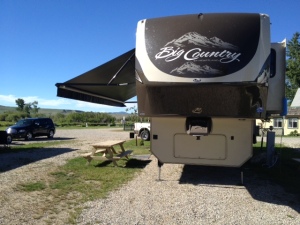 Set up at Deer Lodge

We chatted with our next-door neighbors who are also traveling to the Tacoma area to visit their son, who is in the service. They are taking it slowly across from their home in North Carolina and staying two or three days in each place. Since they are fully retired, they have that luxury. We hope to be able to do that someday, as well.

After dinner, Val and Malcolm walked downtown and looked around just a bit, then headed back to the trailer to do dishes and relax. Malcolm wrote out postcards and we dropped them off at the camp office to be mailed out. 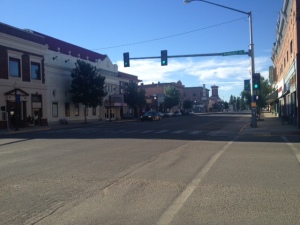 Downtown Deer Lodge and the one stop light 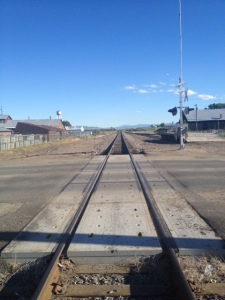 Railroad tracks going off to who knows where 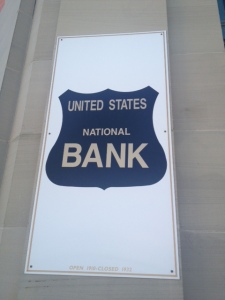 Did pretty good on license plates today. There was a little more traffic on I-90 in Montana than there was in Wyoming. Probably because there are more cities along the interstate in Montana. We had 35 of 51 plates. Note that we saw both Alaska and Hawaii plates today. Oddly enough, no Nevada plates today. 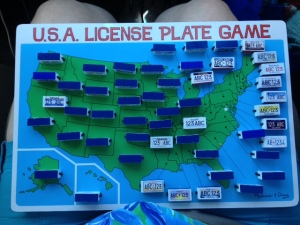