This morning, we got up and moving super early (out the door by 7:30 am) and went over to Elizabeth’s house. Our granddaughter, Violet, wanted her “Pa” to take her over to Legendary Donuts and pick up some breakfast. We all loaded into the truck (except for David) and headed over to grab donuts and coffee at Starbucks, then back to the house to eat our treats. 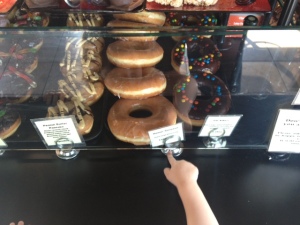 After breakfast, Violet and her Pa played horses on the floor. 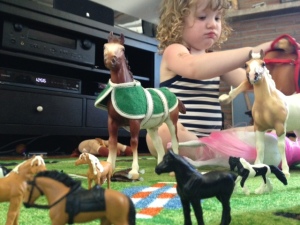 We took turns entertaining Scarlet, the younger granddaughter. Eventually, it was nap time. While the girls slept, Malcolm and Val went out shopping. We stopped by the tea place and picked up some various loose leaf teas. On the way through town, Malcolm saw a car wash and pulled in to wash the truck. Unfortunately, after it was all soaped up from the brush, the rinse decided not to work. We drove around letting the soap blow off or dry up. It actually dried pretty well, so we left it as-is.

A quick stop by Fred Meyer’s (grocery store) to grab some spaghetti and an onion for dinner and we headed across town to Camping World. Malcolm wanted to look into buying a better fifth wheel hitch for the truck. Camping World said that whatever we picked, they’d have to order and offered no guarantee it would be in this week. However, they were kind enough to refer us to a place down the street that might have hitches in stock.

We stopped at the recommended place and while they didn’t have hitches in stock, they could get the one Malcolm wanted in the next day and had a pretty good price on it, to boot. Malcolm ordered and paid. He will run down tomorrow to pick it up. It should (we hope) just mount up to the existing rails on the truck bed.

We headed back to Elizabeth and Cole’s house for a dinner of Skyline Chili. We had brought back quite a few cans of it for them from Kentucky. After dinner, everyone except Cole (our son-in-law) went to the mall. Elizabeth needed to return something and Val and David were looking for clothing items. Malcolm watched Violet play at the play area. We had a treat from DQ while we were there.

After the mall, we headed back to the house to enjoy the weather that was cooling down as the sun set (it was up in the low 90’s today). Here are several pictures (by request) of the grandchildren taken in the back yard. 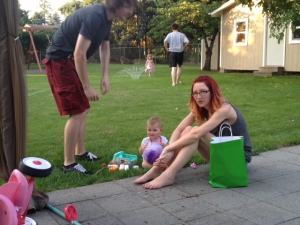 Cole “flying” Violet through the sprinkler.

Cole and Violet chasing around the yard.

Scarlet sitting in Nana’s lap, enjoying the activity (and some turkey).