This morning, Malcolm and David slept in really late. Malcolm has been having problems sleeping at night due to stomach issues. We figure it is the late hour that dinner is being served out on the island (typically 7:oo to 8:30 PM Pacific time, which translates to our central time of 9:00 to 10:30 PM). Eating late, then heading to the trailer to go to bed is causing Malcolm’s acid reflux to flare up.

Once up and moving, we stopped by Costco to look at something before realizing that none of us had a membership card with us, so we moved on to the sporting goods store. Malcolm had wanted to pick up a new golf bag, David and Val had been looking for new running shoes and David wanted to get a one day fishing license for today so he could go out fishing with the cousins. We found all that we were looking for at one store.

Once we left the sporting goods store, we realized it was already lunch time, so we went ahead and sat down to have pizza at a nearby pizza place. The pizza was really good and we took the leftovers out to the island with us.

We just hung around and relaxed at the island. David went out fishing with the guys. Malcolm and our son-in-law, Cole, worked on trip planning for our trip to San Diego next week. We want to try to catch a couple of sights as we travel down the coast. Malcolm finally found a campground in the San Diego area that had an available spot for the three weeks we plan on being there.

Here are some random pictures from today. 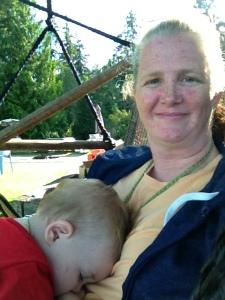 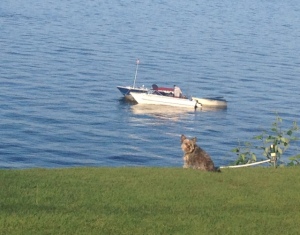 David returning from his fishing trip

Mount Ranier in the distance

Mount Ranier as the sun is setting

One thought on “More Island Fun”