We got up this morning and took our time about the place, straightening up and other small tasks. Our daughter and grandchildren were planning on coming over and spending the day with us at the trailer, so we were preparing for little ones in the trailer.

Malcolm’s phone rang while we were puttering about the trailer and he saw that the phone number was in Indiana. That reminded him that he needed to call Heartland today and let them know the plastic trim piece they sent to fix the corner of the roof (that didn’t get fixed at rally) was the wrong piece.

As it turns out, someone from Heartland was calling Malcolm to let him know they were in the process of sending the correct piece, but they were out of the beige/tan piece that we would need. However, they were having it sent to paint and would ship it to us when it was ready. Malcolm let them know we’d be on the move this week, but should be settled in San Diego for a while and they could ship it to us there. They will call back next week to get a shipping address. We love Heartland’s customer service. We’ve had nothing but positive experiences with them so far.

Since the family was having a late morning, Malcolm decided to drive into town and get the oil changed on the truck. He got back and the family showed up shortly thereafter.

We enjoyed their company for a bit, then decided to load the girls in the double stroller and walk for a bit. We ended up walking a few blocks away to a Don’s Drive-In Restaurant for lunch. The food was great and they had awesome milkshakes, as well. We didn’t have any of their pies, but saw a few being served and they looked really good. 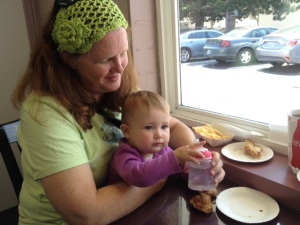 Scarlet and Nana enjoying their food 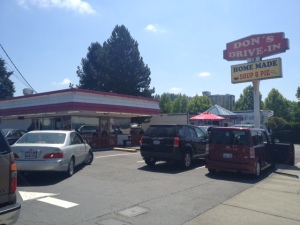 We walked back to the campground, which has been gaining a few rigs. One was pulling out and another coming in as we were getting back. It was getting close to naptime for the grandbabies. While Mom worked on that, Malcolm headed up to Lowe’s to get a swaging tool that he will need to fix the cable on the kitchen slide tomorrow (assuming the repair kit is delivered as promised). 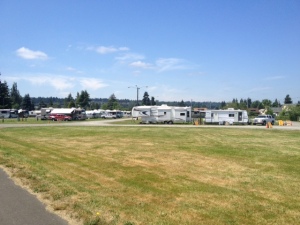 Once the older granddaughter, Violet, was down for her nap, Val, Elizabeth and the younger granddaughter, Scarlet, headed to the grocery store. Malcolm and David were left to babysit the sleeping toddler. Once groceries were done and children were awake, our son-in-law, Cole, and his parents came over for a cook out at the trailer.

We had a great visit and everyone headed home around 8:00. We tidied up, did dishes and plopped down for the evening.