Today’s trip was to Legoland. Since our son is with us this weekend but is flying home this coming week, we decided to take him to Legoland. He’s always been a big Lego fan and still has a fairly substantial collection at home.

We rolled out of the trailer around 8:15 AM and got to the park right around 9:00 AM. It had recently just opened and we parked pretty much in the first row of parking, making for a short walk to the entrance.

The park would have been much more fun for younger children (pre-teen) than it was for us. Regardless, Malcolm and David managed to find a few faster rides. Many of the exhibits were fun, especially Miniland, which has several scale cities such as New York City, San Francisco and Las Vegas, all built with Lego blocks.

Here are a few pictures that Malcolm managed to get uploaded. Our internet is still very poor here. 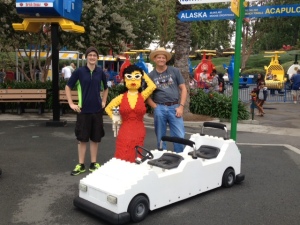 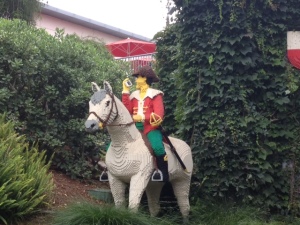 Talking on his phone? 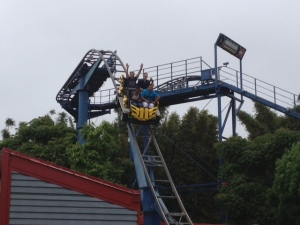 Malcolm and some heavy breathing dude

After we left Legoland (around 4:30 or so), we headed back towards home by taking the US 101 coast highway instead of I-5. Very scenic drive and lots of nice small towns along the way. We stopped by a yarn shop in Encinitas.

We also looked for something nice and seaside for dinner, but thought about stopping after we’d passed most of the likely spots, so we decided to head back to El Cajon and try the Italian restaurant there. It was delicious.