After traveling with us for five and a half weeks, our son flew home on Wednesday. We’ll miss David and are glad to have been able to offer him the opportunity to travel around the country for a bit. It was a good break for him, as well.

This week is the second of three planned weeks of Malcolm working here in San Diego, although there is a possibility of a fourth week (our schedule is flexible enough to allow another week or two here, if needed). Malcolm will make that determination next week. Our spot here at Vacationer is paid up for a month, so another week wouldn’t cost any extra (except for electricity usage).

Since Val ran David downtown to the airport on Wednesday, we traded vehicles so that they could navigate San Diego and the airport with the rental Toyota Corolla. Malcolm drove the truck to work. It is evident driving around San Diego that almost nobody drives really large pickups, let alone duallies, if they aren’t using them for business purposes. Parking lot design bears this out as well.

Rush hour grind in the truck.

Taking up part of the aisle

Malcolm’s commute is averaging about 40 minutes going to work and about 50 minutes coming home. Leaving earlier or later doesn’t have much bearing on the time.

Val visited some friends of ours that live out here on Wednesday afternoon, since she had the Toyota. They are a young couple who moved here from Alabama after they got married. He is in the service and they have a baby that Val said was cute as a button. We plan on doing some sight-seeing with them on Saturday.

Wednesday evening, we went to the Yogurt Mill and had frozen yogurt. Their sizes are huge. Val got the baby size and Malcolm got the child’s size. 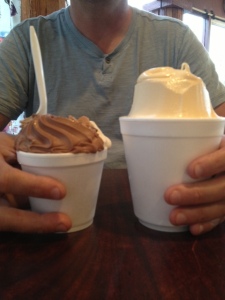 The yogurt itself was fairly reasonable compared to the pay by the ounce places. Toppings were a bit pricey at $1.35 each. However, the baby size comes with one free topping. We paid about $7 total for the two containers of frozen treats.

Today while Malcolm was at work, Val finished up some laundry and put the living room back in order (finished packing up the extra sheets and folding up the hide-a-bed). While the laundry was tumbling in the machines, Val did some crocheting outside next to the pool (which is rather nice, though we haven’t dipped our toes in it yet).

This evening, we wandered around the mall and Malcolm got his hair cut. We spent the rest of the evening relaxing.