Today we headed downtown with tickets in hand to ride the Grand Canyon Railroad train up to the Grand Canyon. We stopped in the station to get bus tickets so we could ride the bus around at the park, as well as eat lunch there.

Before we got on the train, they had a short western show down the tracks from the station. Several of the men in the group were the same ones from last night’s show in the streets of Williams. It was a fun diversion.

Trying to “rob” a “rich tourist” 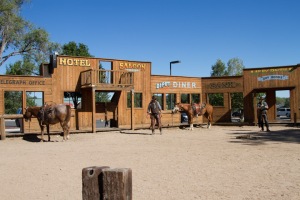 Once the show was over, we all wandered over to board the train. We rode in first class which was price-wise, about the middle of the pack. The seats were very roomy and comfortable. We were served complimentary food and beverages on the trip up and back. 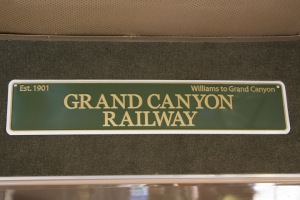 For whatever reason, WordPress doesn’t want to upload the picture of the inside of our train car.

Once at the park, we headed to our bus which took us to get lunch. It was a pretty good buffet. From there, we rode to two different lookouts to get pictures. The second lookout didn’t have very many spots to get pictures from and, frankly, it would have been pretty much the same type of scenery. We pretty much sat in the bus at the second stop.

WordPress is pretty much done letting us upload pictures this evening for whatever reason. I’m sure you can Google plenty of pictures of the Grand Canyon if you really want to see some.

Once back from the train ride, we stopped by the trailer, changed clothes and headed into Williams for another gunfight on the street, a little shopping and dinner.