First, I (Malcolm) must apologize for the lack of any mention of anything Val did the last two days in yesterday’s blog entry. She has, in fact, been very busy around the trailer since we’ve been here in Houston. Lots of sewing projects have been accomplished, cookies baked, crochet work completed and the list goes on. I appreciate all the things she does and I apologize for not mentioning them yesterday or in prior posts.

With that said, Val pushed me to get a couple of things done that I’ve been putting off. First up was replacing the plastic shelf thingies in the pantry/cabinet next to the recliners. As you can see from this photo, the clips tend to bend down under weight and stress and we tend to put heavy things in this cabinet.

One of many bent brackets.

We replaced the plastic things with metal rails designed for the inside of book shelf units that you put clips into to mount your shelves. Malcolm removed the old plastic rails and installed the metal ones using the same screws in approximately the same locations.

All the stuff that was in there. 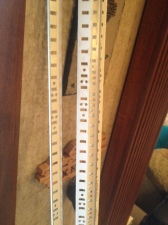 Malcolm measured how long to cut the rails (they are 72″ long from the store) and used his hacksaw to cut them all down to size. Then, they were mounted inside the cabinet.

The short pieces that were left over were mounted in the lower cabinet, which didn’t originally have rails or shelves. We’ll end up making a shelf or two at some point. 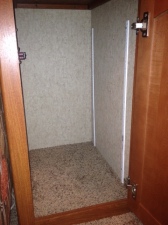 We didn’t take any pictures of everything put back into place, but the astute observer can probably imagine it looks more or less the same.

While we were at it, we finally hung up Malcolm’s birthday present from our daughter. She fashioned this sign from a cedar shingle. It hangs in the bedroom next to Malcolm’s side of the bed.

That’s all for today. We’ll be here a couple more days, then pull out Saturday.