Today we packed up the trailer and our cat Callie to head north for the Heartland Owners Club Mississippi/Alabama chapter fall rally. This rally was initially planned to be held in a Corp of Engineers campground in Mississippi, but then the government shut down. As a matter of caution, the site was moved to our current location here in Decatur.

We weren’t sure how well Callie would travel in the truck, but it was only about a 3 1/2 hour drive here, so we figured we could put up with meowing that long if we had to. We gave her half a dose of kitty calming treats before we left, but it didn’t seem to have much effect. After about an hour on the road, she was still meowing, though not obnoxiously loud. We let her out of the carrier for a while and she would lay in Val’s lap for a bit, but would climb back into the back seat and meow.

We stopped at a rest area and put her back in her carrier along with another half dose of calming treats. She nibbled on the treat at some point, but managed to settle down without the treat. She was pretty quiet the rest of the trip, only meowing very occasionally. All in all, not bad for a first trip out. She settled right back into the trailer without any problems. 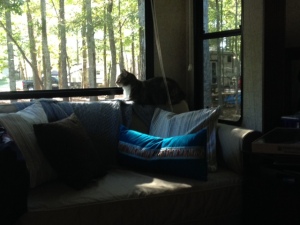 Callie settled onto the back of the couch

We arrived in Decatur a little after noon, probably closer to 1:00. We backed into our spot and got set up, then ate lunch. Malcolm did a few errands outside. A few folks were already here, but were out running around. A couple more trailers showed up after us. We are currently parked between Hogan and Donna Cooper and Wayne and Nita Cooper.

Several of us met outside and stood by the road talking. Eventually, some drove off to eat dinner out. Others, including us, went to our trailers to fix dinner in. Malcolm grilled hamburgers outside.

The weather here is rather cool. Malcolm checked the forecast before hooking the water line up and noticed that Friday night’s low is supposed to be 27 degrees. He hooked up the heated water hose just to be safe. Looks like fall has arrived.