On Friday, Malcolm came home from work a little early. He had enough hours this week (actually over enough), plus there was a football game at the stadium downtown on Friday evening, so it was recommended to get out of town early to avoid game traffic.

After dinner in the trailer, we decided to check out the Christmas light show around the corner at the Jellystone campground. It was $25 a vehicle, so we weren’t sure initially if we wanted to spend that kind of money. Boredom ruled, however, and we went over to see the show. It ended up being a lot of fun (and larger than we thought it would be). Most of the entry fee was going to charities, so that made it more palpable.

After the light show, we decided to check out a nearby shopping plaza. The only thing really open for shopping was a western wear store – Trail West. We stopped in for a bit, as they were closing in 30 minutes. Malcolm found a nice shirt. He also mentioned his nice western hat needed to be fitted to his head better and had a crinkled brim. They told us to bring it in on Saturday and they’d fix it.

After Trail West, we headed back to the trailer to take it easy. Malcolm watched part of the football game that was going on downtown (Tennessee Titans vs. Indianapolis Colts), then headed to bed.

This morning, we got up and Malcolm took an empty LP tank to get it filled at the campground. After putting it back in place, we headed to Trail West with Malcolm’s hat and got it fixed. While there, Val found a nice pair of boots.

From Trail West, we headed south to meet Malcolm’s co-workers for lunch in Cool Springs, but we headed that way via downtown so Malcolm could show Val how he gets to work and what downtown looks like. We got to the Cool Springs area early and found a childrens’ toy store. We bought a gift for our youngest granddaughter there, then headed through the heavy shopping traffic to Taziki’s for lunch.

After a long lunch and some visiting with Malcolm’s co-workers, we headed to the historic town of Franklin. It has a very vibrant downtown. We strolled up and down Main Street for a while, checked out a few shops and picked up a couple gifts and some postcards for the grandchildren and our niece. We headed back to the truck and headed to the trailer after that. 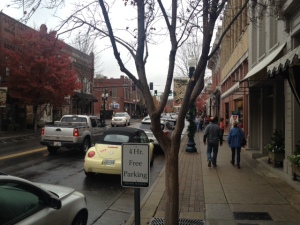 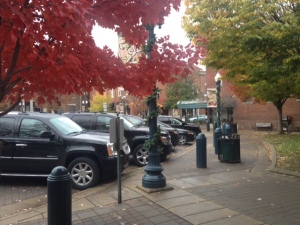 As we got close to the area where the campgrounds are, we found that there is some type of big show this evening at Opryland (which shares our exit). We took side roads to skirt around the backed up highway traffic and got back to the campground easily. After unloading our shopping from the truck, we headed to the Cock of the Walk restaurant for dinner, which is adjacent to our campground. Dinner was good – mostly fried foods. After dinner, we plopped down in our easy chairs to unwind from the day’s activities. 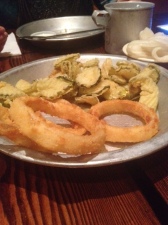