After debating what to do about our water pump, Malcolm decided to buy a new one at Camping World and install it. The other one will go back to the manufacturer under warranty and get fixed or replaced. We’ll keep that pump as a spare.

While Malcolm was picking up the pump, he also decided to get an accumulator to go along with it. He installed the new rig while dinner cooked on the grill. We tested it after dinner and Malcolm buttoned everything up. The new pump is reasonably quieter than the old pump. 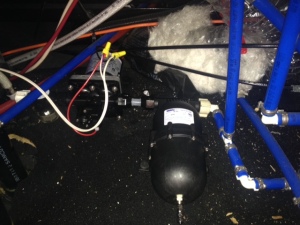 Today while Malcolm was at work, Val cleared out the basement and put a fan in to help dry out the carpet. It got fairly dry, but we put down a couple old towels before loading the basement back up with totes. We were planning on replacing the towels, so we’ll let them soak up for a couple days since we’ll be traveling this weekend.

Malcolm found out earlier this week that one of his cousins lost her battle with cancer. They are having visitation in Louisville Friday evening and a service on Saturday morning. We won’t be able to make the service, but plan on driving up to Louisville on Friday afternoon, visiting with family for an hour or so, then driving back to Nashville. Since we’ll be doing that tomorrow, Malcolm decided to go ahead and turn in the rental car this evening.

We finished buying Christmas gifts this evening, loading up on gift cards at Kroger. In the process, due to a promotion Kroger is running, we got 4X the fuel points for buying the cards ($350 worth of cards). After paying for those and a few groceries we needed, we went across the street to their gas station and fueled up the truck at fifty cents off per gallon ($3.23).

We still have enough points to get another tank at fifty cents off per gallon, so we’ll use that after we get back from Louisville and before we pull out Saturday morning to head south.