Today, once we got out and about, we decided to mostly drive around and see the sights. On the way towards town, we stopped and Malcolm washed the truck. We then drove out west as far as we could on the main east-west highway through Gulf Shores until it dead-ended at a gated condominium community. We turned around and headed to town, then ate lunch at Lulu’s.

After Lulu’s, we headed west on the road we thought we were on originally. It ends at Fort Morgan, so we paid our entry fee and stopped in to walk around and visit. There was a lot of history there, with the fort originally built after the War of 1812 when Congress realized the need for stronger fortifications around our eastern and southern coasts.

Over the years, and for different war efforts, additional batteries were added to support newer and larger cannons and artillery. The fort was deactivated in 1923, but was briefly re-activated during World War 2, then deactivated permanently. 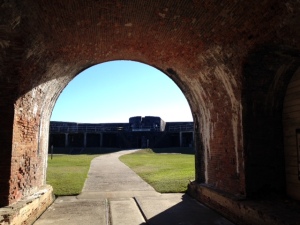 Tunnel leading into center of fort.

One of the newer batteries

View from the top of the walls

After touring the fort, we headed back towards town. We stopped by Walgreens to pick up some medicine and were delighted to find they had a 25% off everything coupon in force just for Black Friday. It was supposed to have been in a mailer, but the cashier had one that he scanned for every customer. Never hurts to save a little on medicine.

Back at the RV park, Malcolm attended to a few items such as cleaning the shiny parts on the truck that the brush at the carwash missed (wheels, grille, etc.). He also re-tightened the bolt that stabilizes the bike carrier on the back bumper of the trailer, as Val had noticed it was rocking a bit. He also fixed a trim piece that was coming loose on one of the slides and emptied the front gray tank.

We checked to see what was going on at the RV park clubhouse this evening and found one of the families entertaining guests there. They welcomed us to join them, but we decided to head back to the trailer and finish off some leftovers. After dinner, we headed to DQ for dessert, but found that it was closed. A short drive up the road and we found a frozen yogurt place and had a treat there.

This evening’s sunset was gorgeous: 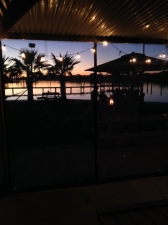 View from the RV Park clubhouse