Today ended up being the nicest, warmest day since we got here last weekend. The high temperature was in the mid-60’s. Malcolm decided to wear short sleeves. We headed out mid-morning to do a little clothes shopping. We braved the outlet mall and found it wasn’t a madhouse, but was somewhat busy. We immediately found a good parking spot for the dually and walked around.

Malcolm bought some new khaki pants and a couple semi-casual long sleeve shirts. They’ll be handy for days when he has to work in the corporate offices. He also picked up a couple belts. This was all at the Haggar outlet store, which was running pretty much everything at 65% off retail. Val found a couple pairs of jeans at Vanity Fair outlet at reasonable savings, as well.

We headed out from the outlet mall and stopped for lunch at Mellow Mushroom. From there, we stopped by The Pottery Barn, where Val found a nice holiday rug for inside the trailer door. We headed on back to the trailer after that.

Once back at the trailer, we set about taking care of some pre-packing to get ready to pull out tomorrow. Malcolm emptied the front gray tank, and gave the black tank several good flushings. While the black tank flush was in progress, Malcolm replaced the batteries in the tire pressure monitor sensors on the rear dually wheels. This involves jacking up the truck and removing the outside wheel to gain easier access to the sensors on each wheel. Hopefully, they’ll behave tomorrow.

After all the truck and tank maintenance, we took care of tidying up a few little things and decided to walk across the street and down the beach for a bit. We wore flip-flops and took them off at the sand. The sand was ice cold. The water wasn’t any warmer. We walked for a bit, then headed back to the trailer. 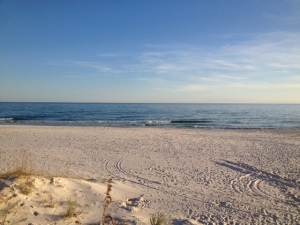 Finding everything we had set in the refrigerator for dinners still frozen, as well as things that were not previously frozen being frozen (adjusting the fridge temperature tends to be an exercise in frustration), we decided to pick up some (ironically) frozen dinners or entrees from Publix and make a quick and simple meal. On the way back to the RV park, we stopped and filled the truck with fuel. The sun was setting by this time and Val caught this picture as we were driving over a bridge.

After dinner, we flipped through TV channels for a bit and just relaxed. Tomorrow morning, we head back to Wetumpka for a week of work for Malcolm.