Well, sort of lazy. Yesterday, we got moving late in the morning, so no free breakfast at Lazydays (they give you free breakfast and lunch coupons to eat in their restaurant). We did, however, make the lunch. It was pretty decent – grilled chicken breast on a bun with cheese, lettuce and tomato plus home-make kettle chips. Fairly tasty.

We went to the grocery store to stock up on stuff and put everything away. Malcolm took the truck out and put fuel in it as well as washed it. He also cleaned up around the outside of the trailer. Meanwhile, Val rested inside as she wasn’t feeling well. By dinner time, she felt a little better and had ramen noodles for dinner while Malcolm had a blackened and grilled chicken sandwich for dinner.

After dinner, we drove down to Best Buy to purchase a camera that we will use instead of our phones (for the most part) for everyday photography. Carrying around one of our big DSLR cameras isn’t too convenient, so our fairly limited but decent phone cameras have pretty much filled the bill over the last year. We figured a nice point-and-shoot camera with decent specifications would at least take better pictures than the phones under more circumstances.

We took advantage of Best Buy’s price-matching with online competitors to get the camera for $189.00 instead of the in-store listed price of $249.99 (and, ironically, Best Buy’s online price of $199.99). So, you’ll start seeing more pictures on our posts starting today.

This morning, we didn’t take advantage of the free breakfast yet again, though we could have since we were up early enough. However, it was lightly raining and we just didn’t feel like venturing over there. Instead, we ate breakfast in and then headed out to visit the Florida Aquarium in Tampa. We drove down in the truck and parked in their lot for $6. Admission was a bit steep considering the size of the aquarium (about $46 for the two of us). The aquarium was fairly nice, though. Malcolm got a lot of nice pictures with the new camera:

Sculpture nearby in the traffic circle 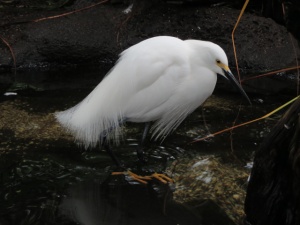 Bird in one of the exhibits

Sting-ray resting against the glass 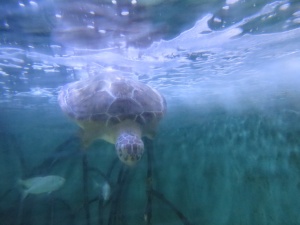 After the aquarium, we walked about a mile into downtown Tampa to meet our friend Robby for lunch. He works in the county building that he called the “pink building”:

He came down to the lobby and we walked about a block away to a Cuban/Latin restaurant – Cafe DeSoto. The food was great and the prices were pretty good, as well. Service was fast and friendly. We had a good time catching up with Robby. We hadn’t seen him since last January when we were in Tampa. 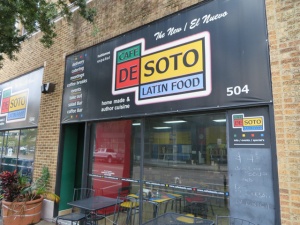 After lunch, we walked back down to the aquarium parking lot and grabbed the truck to head back to the campground. Once back to the trailer, Malcolm unloaded pictures from the new camera onto his computer via wi-fi (yay, no hunting around for cables) and had the ones he wanted for the blog all picked out and ready to go.

Dinner this evening was a club pitch-in at Randy and Santha Allen’s trailer. There were grilled burgers and everyone pitched in a side dish. We brought a chef salad and dressing. The food was great and so was the company. 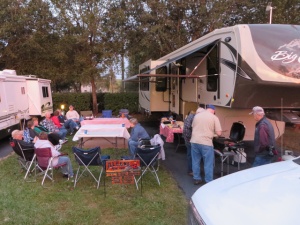 Waiting for dinner to finish grilling 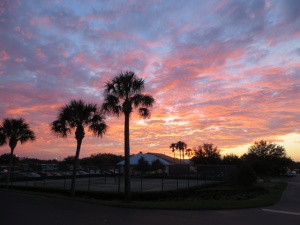 We were treated to a great sunset