Not much going on yesterday. Malcolm worked, we did a little shopping, hung around the trailer.

Today, Val rode the shuttle downtown and ate lunch with Malcolm and his co-workers. We both walked back down to the bus stop after lunch and got there just as the shuttle was pulling up – good timing. Malcolm walked back to work and finished his day.

Today, Malcolm called the KOA and asked if we could park David’s car there somewhere while we are down in Texas the next four weeks. They said “Sure! And no charge.” We just have to pick up a new mirror hanger with a new date on it that reflects the date we’ll be back and we can park it in the overflow lot just across from the office. They sure are accommodating here. That will save us the trouble of driving the car to Malcolm’s co-worker’s house about 30 minutes away. Instead, it will be right here when we get back.

This evening, we felt like eating pizza, so Malcolm looked up a really great pizza place a little bit east of here in Hermitage. As we were leaving the campground, we saw several orange vehicles of various types parked in the corner of the campground. One had a tent on the roof. We drove back to check it out. Val mentioned that the office had said that it was a big group that comes through every year.

The group is from The Netherlands and brought their vehicles over here to travel and camp from New York City to San Francisco, then down the west coast into South America and ending up in Rio De Janeiro. The group goes by the name Oranje Trophy. Click here for their website. Here are a few pictures of some of the vehicles. 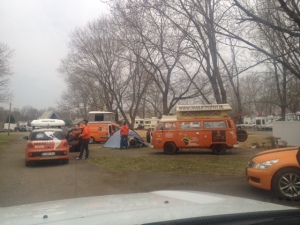 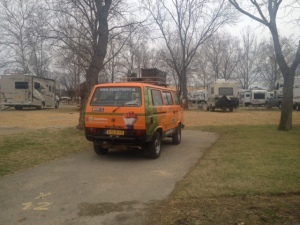 After driving around and taking a few pictures, we headed on to dinner at Gondola House. It was every bit as good as the good reviews that Malcolm read on the place. We each ordered a 12″ pizza and we brought half of it home. Malcolm will take his half to work tomorrow for lunch. 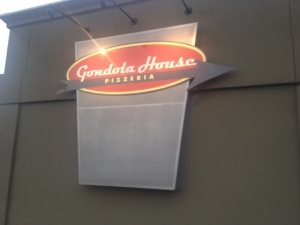 After dinner, we headed back out to the truck under a light rain and drove to Bass Pro Shops, where Val had been pricing raingear earlier in the day. We each picked up a proper rain coat after Malcolm pretty much got soaked in his old rain coat while hooking up the trailer in Wetumpka a couple weekends ago. We found that there was a lot of “rain gear” that was advertised as “water resistant”, which is what we suspect Malcolm’s old rain coat is. The new ones are both water proof. We got to try them out on the way out of the store as it has been raining pretty steady the rest of the evening.

One more day of work for Malcolm tomorrow, then we head out on Saturday back to Alabama, then Louisiana and finally Texas for about 3 weeks.