David had another day of town pass today. We drove to base and arrived around 9:30 AM (0930) to pick him up. We stopped by the ticket and travel office and picked up a form to get free tickets for Sea World which is one of the benefits given to new airmen and their families. After that, we headed off base for the day. Our first stop was at a Cracker Barrel for a late breakfast.

After breakfast, we arrived at Sea World, parked and stood in the ticket line for about a half hour. Once it was our turn, we waited around several more minutes while they typed the information into the computer to spit out our free tickets. We showed David’s military ID and our tickets and we were in.

Malcolm, David and Kyle essentially just rode the two rollercoasters that they have at the park. We didn’t go to any of the typical Sea World shows since David wasn’t really interested (and admission was free). We had a snack at one of the indoor, sit-down restaurants later in the afternoon before riding the rollercoasters one more time before heading out. 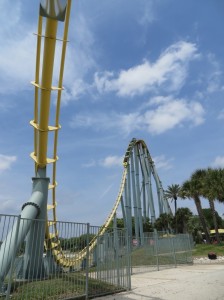 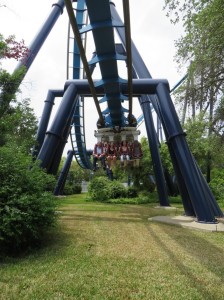 We stopped at Rudy’s Bar-B-Q on the way out for dinner. It was pretty good, despite their tagline of being the worst barbecue in Texas. We headed back to base and stopped by the main Base Exchange for David to pick up some new luggage, then dropped David off so he could head back to his dorm. 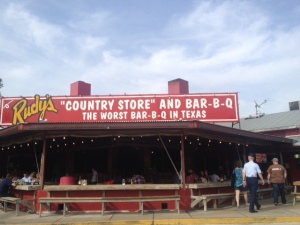 Kyle leaves early tomorrow morning, so we’ll be on our own to head on base tomorrow. We’ll meet David for church service, then hang around with him on base until around 5:00 PM. He will be packing up and leaving for Keesler Sunday evening.

2 thoughts on “Another Day of Town Pass”