On Tuesday, we headed out late in the morning and stopped at Joe Bologna’s Restaurant. It has one of our favorite pizzas. The building is an old church building. “Joe B’s” has been a Lexington tradition since they opened in 1973. Their breadsticks are huge and come out floating in garlic butter. Yummy. 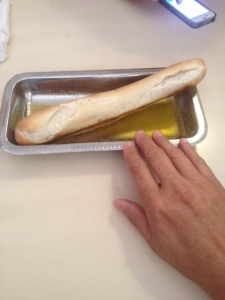 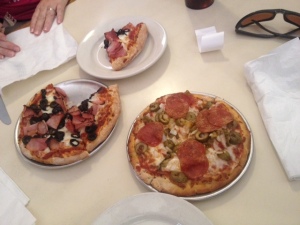 After a hearty lunch, we drove down to Fayette Mall and walked around for a bit. We picked up a large UK (University of Kentucky) sticker for the back of the trailer. Might be a bit before Malcolm can apply it since he will have to get the bikes down from the back. We probably won’t do that for another couple weeks. From there, we headed back to the trailer for Malcolm to rest for a bit, then ate dinner.

After dinner, we headed to visit with the two remaining Heartland Rally couples here at the park – Jay and Stella Coffman and Dave and Nancy Seabolt. They were both heading out in the morning. We all sat around and talked for quite a while, except for Stella who was off doing laundry.

This morning we slept in really late and were really lazy. Malcolm did a little bit of work and we took our time getting ready to go. We headed out around 11:00 to meet Malcolm’s Aunt Margaret at her house for lunch. We had a leisurely lunch and then decided to walk around the local “Peddler’s Mall” (antique/flea market). On the way there, Malcolm’s Uncle Jerry passed us, so we went back to pick him up.

We walked around for quite a while and Val picked up a few things, then we headed back to Margaret and Jerry’s house for a short bit. Malcolm was due his mid-day dose of antibiotics, so we had to head on back to the trailer. He took his meds and rested for a bit before we ate soup for dinner.

After dinner, we just took it easy, taking a brief break to take shelter in the bathhouse due to a potentially heavy storm rolling in. Turns out the heavy part missed us, but better safe than sorry. It is supposed to storm off and on all evening, so it should be a late night tonight.