We finally found a stained glass window design we liked here at the national Heartland Owners Club rally. There is a couple here that travel around selling them. These windows are a direct fit replacement for the frosted glass installed in most RV doors. We took pictures as Malcolm installed ours and Malcolm decided to make a separate tutorial post on the process. It took all of about 20 minutes.

1. Put tape around the perimeter of the frame on the outside of the door. You don’t want the frame breaking the seal so that you can prevent leaks or having to re-seal the window frame. The stained glass folks recommended duct tape, but Malcolm had a wide roll of blue painter’s tape left over from our house painting. It worked just as well and was probably easier to remove.

Outside framed taped up

2. With the outside frame taped up, start removing the screws from the inside frame. There are about 16 screws around the perimeter. On the last couple of screws, hold onto the frame and let it out from the door gently. Before removing the frame from the door, mark the top in some fashion (another piece of tape works well) so that it can be installed in the same orientation. 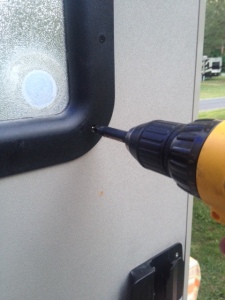 Removing the screws from the inside frame

3. Once the frame is removed, the glass will most likely still be stuck to the outside frame. Be careful just in case, though.

4. Gently pry the glass off the outside frame and lay it aside.

5. There will be some of the sealing putty from the old glass still adhered to the inside perimeter of the outside frame. Gently roll or peel it off so that you have a clean plastic frame.

Putty on frame (the brown stuff)

6. When we bought our new window, the seller provided a roll of putty for sealing the new window. Determine which side of your window is supposed to face outside and lay the window down on a work surface with that side facing up. Stick the putty strip along the outside edge of the new window so that it overlaps a little to the outside and a little to the inside of the metal frame of the window. Do that for all four sides and remove the brown backing paper. 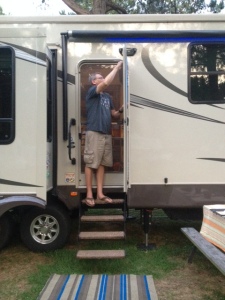 Putting the new glass in (sorry, no detailed picture of the tabs)

9. Once the inside frame is in place, start putting the screws back in. It was recommended to use a hand screwdriver since the screws are going back into soft plastic. Malcolm’s cordless drill has an adjustable slip clutch on the chuck that he set down to the very minimum. It was just right to keep from stripping out any screws. You just need to snug them up enough to pull the frame in flush with the door.

Putting the screws back in.

10. Remove the tape from the outside frame. 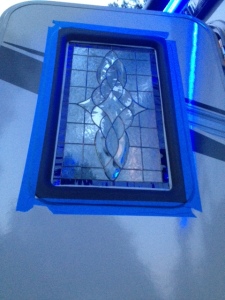 New glass in, before removing the tape.

11. Using a sharp knife, carefully cut away all the extra putty that squeezes out along the inside edge of the outside frame. You might find you have to do this a second time after everything settles. 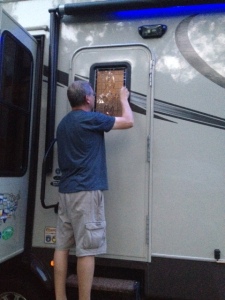 12. Stand back and enjoy your new window.

6 thoughts on “How-To: Installing a Stained Glass Window in the Trailer Door”