We’ve been pretty busy the past few days, so here is a catch-up post.

On Sunday, we drove over to Sheppard AFB and met David outside the gate. He climbed in the truck with us and got us on base. We drove around and got the tour of the base before heading to the Base Exchange to do a little shopping and grab some lunch.

The dorm where David lives

The training facility where David goes to classes

After shopping on base, we headed into town and stopped by Best Buy so David could look for something. Malcolm decided to purchase an external monitor for use with his computer to make working with his photography a little easier among other things. The price was right at $140 on sale. Amazon wanted $180. 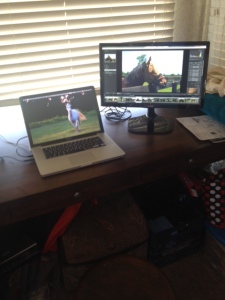 We also did some shopping at the mall and at Target before heading to the trailer to relax for a bit. We had dinner at a steak place in downtown Wichita Falls. The food was pretty good. After dinner, we took David back to base and dropped him off at his dorm. Requisite hugs and handshakes were bestowed before we headed back to the trailer.

Monday morning, we were awakened by lots of lightning and very high winds gusting against the trailer. There was a line of severe thunderstorms just moving through the area, so we decided to take refuge in the bathhouse. A couple other families eventually joined us. We visited and talked for a while before heading back to our trailers at 4:30 AM.

We ended up sleeping in a little later than planned before hooking up to head to Livingston, Texas. Val was back in the truck now that David has his car. We arrived in Livingston around 4:30 PM and checked into the Escapees park here. 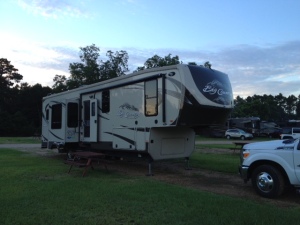 All set up at Rainbow’s End

After settling in and getting the air conditioners running, we headed into town to search out some dinner. The Italian place we like was closed on Mondays, so we settled for the Mexican place nearby. The food was pretty good. We also stopped by Lowes to pick up a few items on our list of little trailer maintenance chores that needed to be done, then headed back to the trailer to relax.

Today we were rolling after 8:00 AM and headed first to the Escapees office to double-check on what we needed to start our residency. They handed over our accumulated mail to us which included our Social Security cards we were going to need.

The next task was to hook up the trailer and tow it to the Texas inspection station about 15 miles away. We got the truck and trailer inspected and the necessary paperwork and window sticker. We then headed back to the park to drop the trailer off and hook it back up. The air conditioners were turned on and we headed into town to get license plates. We needed a couple things from the trailer before we could do plates, so we headed back to the trailer.

Malcolm printed out the things we needed for license plates and then took a shower. He filled out paperwork that the license branch handed us while Val took a shower. With both of us refreshed and all our necessary paperwork ready along with the checkbook, we headed back downtown again. We had all the necessary information this time and getting the plates was a breeze. We were back out the door in less than half an hour.

Since it was past lunch time, we headed to the Italian place and grabbed a great lunch. Afterwards, we stopped by the local State Farm agency and got our truck and life insurance policies transferred over officially to Texas. Once done with that, we headed on up to work on getting our drivers licenses. There was somewhat of a wait, but after about an hour we were good to go with our new Texas drivers licenses (albeit temporary paper copies). With the plates and licenses done, the state of Texas officially recognizes us as residents.