It’s been a busy week since we arrived in Nashville. On Sunday, Malcolm decided to start tearing out flooring upstairs. He removed the carpet in the hall and bedroom and pulled up any linoleum in the same area as well as the bathroom. He had the bathroom tiles all put in Monday evening.

We cut the carpet around the inside of the bed frame to leave a little insulation underneath. The plan was to put the flooring only a few inches under the bed all the way around. This helped in working around the hydraulic slide mechanism, as well.

Pulling out things covering the carpet and wiring. 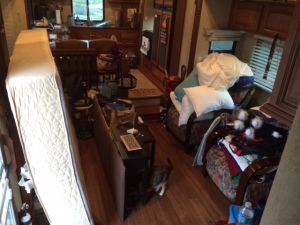 All the bedroom stuff in the living room and kitchen 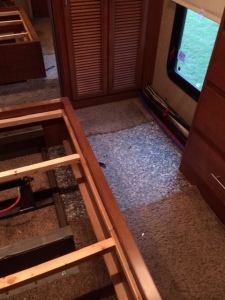 Some of the carpet removed

Removing the flooring was a chore in itself. We ended up setting up our mattress in the living room and spending Monday night down there. On Tuesday, Malcolm started on the vinyl wood plank flooring in the hall and bedroom. He got about 2/3 the way done before he was worn out. We spent the night in the living room again.

Got this far on Tuesday.

On Wednesday, loaded up with plenty of supplies, Malcolm finished the bedroom and got most everything trimmed out. We’ll need to buy some flexible trim (mail order) to finish a couple areas, like the curved wall in the above picture.

View from the hall

While we had stuff apart under the bed platform, we cut a rectangle out of the cover under the platform that was large enough for a laundry basket we purchased to drop down in the hole. It hangs above the floor, so it won’t catch on anything when the slide comes in and out.

Wednesday night we had the bedroom all back together and slept in our normal bed. Val finished cleaning up construction debris today (Thursday).

We had our eyes examined at Costco on Wednesday afternoon. Val rode the shuttle downtown and Malcolm took off early from work so we could get the exams out of the way and contacts and glasses ordered. They should all come in before we leave for Washington in a couple weeks.

Today, our mail arrived from Escapees and contained our permanent Texas drivers licenses as well as the Texas title to the trailer (we’re still paying on the truck, so Ford has that title).

We’re taking a quick weekend trip up to Kentucky, leaving in the morning (Friday). We’ll celebrate Val’s sister’s birthday with her Friday evening up in Lexington. On Saturday, we’re going to Breyerfest and on Saturday night, to the Gala of the Royal Horses show. Then, back here to Nashville for two more weeks.

2 thoughts on “Busy Week of Work and Mods”