On Friday, Malcolm ended up leaving the office about an hour early. When he arrived back at the KOA, he found Val still finishing up laundry, so he stopped in to say “Hi”, then back to the trailer to change clothes before walking back over to the laundry/office. We chatted for a bit with the managers of the KOA, Fred and Jen. They’re both great folks and really take care of all of us here. They recommended we try the new pizza place up the road called “Pie Five”, so that’s where we ended up for dinner. 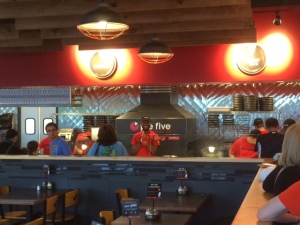 There was a decent line at the restaurant, but it was Friday at dinner time and it is a new restaurant. Once we got up to the corner to order, we specified the type of crust and toppings we wanted on our pizzas and they made them up right there. Then, they put them in the oven. The “five” part refers to the fact that the pizzas cook in only five minutes. So, by the time we got to the end of the counter and paid for our food, the pizzas were ready. They were very tasty. 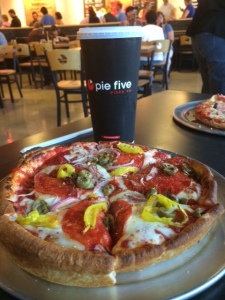 Saturday started off with us getting ready for the Chili Cook-off here at the KOA. Malcolm tossed together what he ended up calling a Cajun Tex-Mex chili. Aside from most of the typical chili ingredients, he tossed in a pound of Andouille sausage and a can of diced tomatoes with green chilies. For seasonings, he just used a box of Carroll Shelby’s chili seasonings. Malcolm got it all started on the stove then we transferred it to the crock pot so we could run out to do a couple errands.

Once we got back, Malcolm added a couple cans of beans and another can of tomatoes since it was a bit spice-heavy. We carried the crock pot down to the main building. There were five total entries. They set out small cups so that everyone could try a sample of each chili and then vote on their favorite. We were pleasantly surprised to find out we won. We got a free t-shirt from the store. We picked a Nashville one to use in our t-shirt quilt next year. 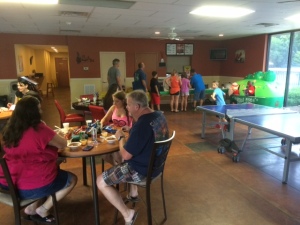 The entries and judges

After the big win, we carried everything back to the trailer and relaxed most of the afternoon. We ended up going out to dinner. We had planned on something over at Opry Mills, but a large crowd was gathering for the Grand Ole Opry concert, so we avoided that area and just ended up at the Cracker Barrel. Later we went out for ice cream, driving over to east Nashville to Jeni’s Ice Cream, but it was super crowded and it was nearly 9:00 PM, so we stopped by a McDonalds and just got cheap cones.

Today, Malcolm woke up with a headache, so we decided to forgo church. Instead, once we got moving and out the door, we ran a couple errands and ended up eating lunch at Famous Dave’s. After that, we headed right up the street to visit The Hermitage, Andrew Jackson’s Home. We won’t go into many details since you can always read about it elsewhere. Instead, Malcolm took a few pictures to share: 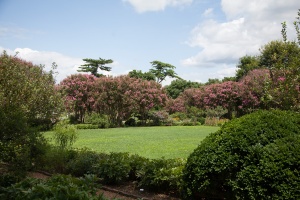 Front of the house

Rear of the house

View of the house from way out

Horse-drawn wagon tour (we decided to forgo it this time) 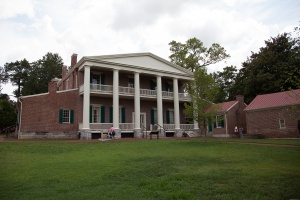 Back of the home 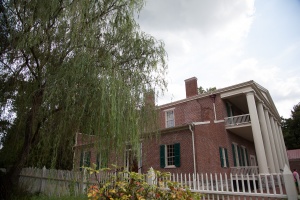 Scenic shot of the side of the house from the garden

Interesting flowers in the garden

After we left The Hermitage, we stopped by Opry Mills and walked around the outside of the Grand Ole Opry and did a little shopping in the gift shop. We also stopped long enough for a photo op or two. 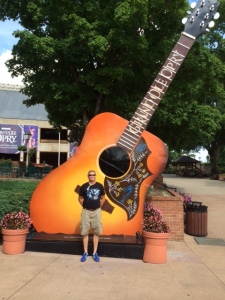 After the photo tour, we ended up walking around inside Opry Mills mall and picked up a couple things we had on our shopping list. We ended up the evening with dinner at Dave and Busters, then headed back to the trailer. Once back, Malcolm remembered he wanted to wash the trailer this weekend after the rain was done, so he did that as the sun was setting, getting done just before it got too dark to see what he was doing.

Earlier in the week, we mentioned moving a bunch of stuff out of the trailer into the back of the truck. Here is a picture of the three totes where everything is stored. The second pictures shows how the cover is pulled back once notch like it is when we are pulling the trailer. The boxes sit on a couple strips of the horse stall mat that Malcolm had cut up to make landing pads.

With the cover in “tow position”

Tomorrow it’s back to work for Malcolm. We pull out this coming Saturday to head west for a four week journey to and from Washington. We can’t wait!