We were pulling out of the KOA in Nashville this morning at 7:30 AM. Our plan was to make it to Russellville, Arkansas as it is about halfway to Wichita Falls, Texas (via I-40 and I-44) to visit our son. We made it, rolling in about 5:15 PM. We hit a couple backups due to construction that weren’t too bad and a backup due to an earlier accident that put us behind about an hour.

We called ahead to the campground here, Ivy’s Cove, and got an answering machine. However, they called back a few minutes later and put our name on a nice, long pull-through spot. Once we got here, paid and pulled around to our spot, we decided to just drop the front jacks, stay hitched to the truck, hook up the 50 Amp cord, put out the slides and turn on the air conditioners.

Pulled into our spot.

Malcolm tossed a couple hamburgers on the grill to keep the heat down inside and we just had hamburgers and chips for dinner. The temperature was 97 and the humidity was fairly high when we arrived. As Malcolm is writing this post at 8:50 PM, the rear air conditioner is still playing catchup and blowing on high. It’s almost there, though. 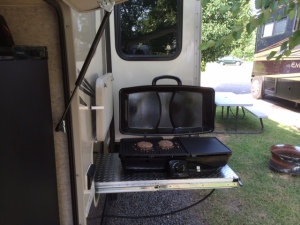 Burgers on the grill

We started back on our license plate sightings this trip. We had given our board away to some traveling friends that have younger children but missed it enough that we bought another. Today’s trip across I-40 garnered quite a few plates – 34 of them.