Val woke up early but let Malcolm sleep in today. We didn’t have to get rolling as early as we had been, since our destination showed a check-in time of 2:30 PM. After getting ready this morning, we headed downtown to eat breakfast.Once done with that, we headed back to the trailer to take our leftovers home. Then it was time to wait. Malcolm decided to clean the truck windshield and front grill due to the build-up of bugs. 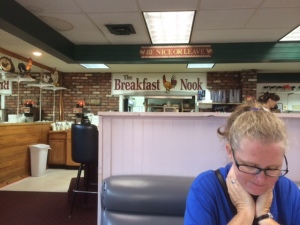 Breakfast at The Breakfast Nook

We decided to drive out and find a car wash, as the whole truck really needed a bath. We stopped to get a couple soft drinks and asked the cashier where a do-it-yourself car wash was. He gave us directions and we found it. Malcolm washed the truck down well. Once he was done, we headed to a yarn shop so Val could pick up some crochet supplies. After that, we headed back to the trailer and packed up to leave. 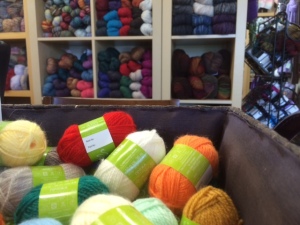 We traveled west on I-90 then up state and US routes to Lake Chelan. We arrived about 45 minutes after our daughter and family arrived, so they walked up to our site to watch us park and unhook the trailer. 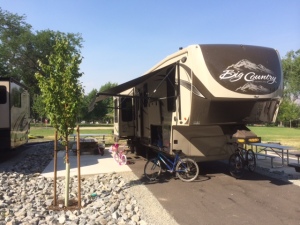 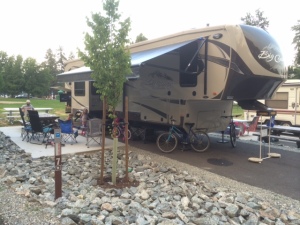 Our site with grandchildren

Once we were plugged in and the air conditioners were running, Malcolm pulled out our birthday present for the oldest granddaughter, Violet, whose 4th birthday was today. Malcolm and our son-in-law, Cole, put the bike together in the living room of the trailer to take advantage of the air conditioning, but primarily because Violet said that’s where it should be put together. It is her birthday, after all. 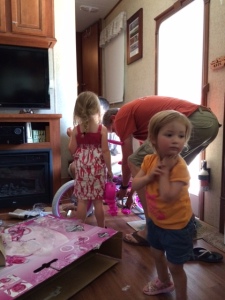 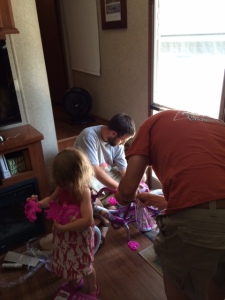 With the bike assembled and some semblance of an evening meal served to those that were hungry, we decided to go down to the lake for a swim. Malcolm and Cole took Violet down to the lake, while Val, Elizabeth and Scarlet got ready and came down later. The water is pretty cold, but fairly easy to get used to. It will definitely feel good in the 100 degree temperatures this week. 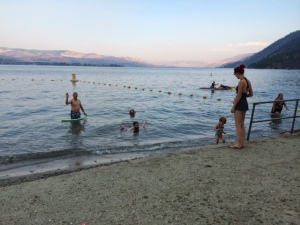 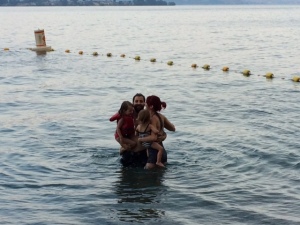 After swimming, we all dried off and changed into regular clothes again. Then we dispensed birthday gifts to everyone. Cole’s birthday was recently, Violet’s is today, Elizabeth’s is the end of the month and Scarlet’s a couple weeks after that. It was just as easy to have a group birthday party. We’ll be having birthday meals for each person throughout the week.