This morning after breakfast, we headed up the interstate to St. Louis and our first stop – the Arch. Malcolm bought the ticket to ride to the top and got some pictures. Val stayed down below to pick up postcards and a t-shirt for our yearly t-shirt quilt. Since Malcolm was alone, he got to go up with the very next group instead of waiting more than an hour. It was a fun visit. We could have probably done more in the area, but we headed out to go to our next destination. Here are pictures from the arch visit. 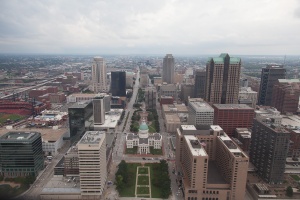 View of town from the top

Malcolm in front of the side of the arch

Artsy view of the arch

What you ride to the top in

We left the arch and were heading to Grant’s Farm. We chose to leave as people were arriving for a Cubs/Cardinals game downtown. With local construction, it turned out we had to drive right by the stadium to get on the interstate. Fun times. The GPS kept wanting us to head to the interstate, but there was no way to get on. We finally winged it and found a place to turn to get on.

Grant’s Farm is an area of the Busch estate (of Anheuser-Busch) set aside with animals and attractions. It is celebrating it’s 60th anniversary this year. The Busch family opened it up to share various animals with the public. A tram ride took us around the estate at the start where we saw various animals grazing on the grounds. Bison, longhorn cattle, various deer and elk among other animals grazed around the place. Here are a few pictures from around the park. 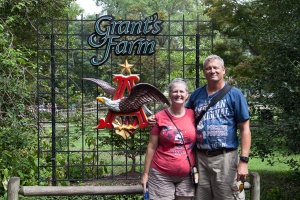 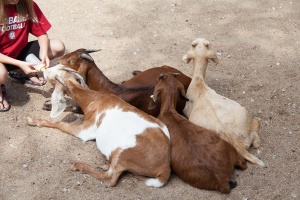 Goats in the petting area

One of several eagles. They’ve suffered various injuries and were given homes here

One of the parrots

Adjacent to the estate is where the Budweiser Clydesdales are trained for pulling the famous wagon. You can walk through one of the stables and down a path where you can interact with a few of the horses, if they happen to be close to the fence, like two of them were. 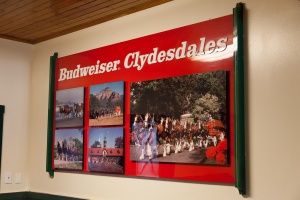 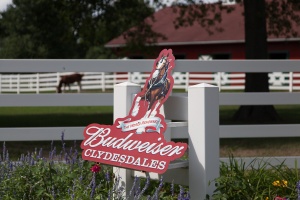 These two were hanging around the fence

After Grant’s Farm, we stopped by next door to visit President Ulysses S. Grant’s home. The “Grant” in Grant’s Farm refers to the former president. The Busch family purchased it in the early 1900’s. The National Park Service takes care of the home and has provided a very nice interactive exhibit in the old barn.