Malcolm’s been working this week. We’ve also put together another mod, of sorts.

Over the weekend, we purchased a Mac Mini computer from the local Apple store. Malcolm set it up as a server. Next, we purchased a desktop organizer to put it in along with a couple external hard drives and a new network router, repeater, range extender. 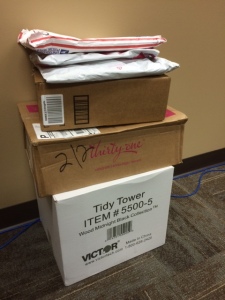 Pile of boxes and mail that arrived today 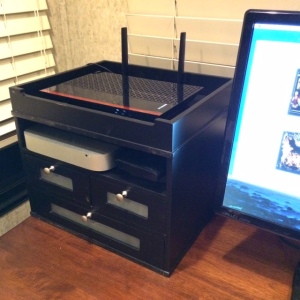 The server contains all the iTunes media which is shared and can be streamed to either of our Apple TV units (living room and outdoor kitchen). The new router is high-speed, designed for high bandwidth applications such as streaming high definition movies. Our initial tests proved very successful on the indoor TV. We’ll test with the outdoor unit later on, but we’re confident it will work just as well.

On Wednesday, Malcolm noticed that a full-time RVing family that he follows in Instagram was in town. We invited them to go bowling with us at Dave and Busters. Wednesday night is half-price bowling night. The father (Jeff) and his two sons joined us. Mom works and was busy with meetings at a nearby hotel. Hopefully, we’ll get to meet her this weekend. We’ve tentatively scheduled a cookout.

Val rode the shuttle downtown today and joined Malcolm for lunch. She also took advantage of the free and very fast WiFi at the office to update her iDevices.

We also did another mod this evening – replaced the faucet on our outside kitchen sink. Malcolm put that in a separate How-To blog post, which can be found here.