Not a whole lot going on the past week. Malcolm has been working, Val has been taking care of stuff around the trailer, doing some sewing and general other things. Tomorrow we are heading out for a two week trip, so today has been spent taking back the rental car, notifying the KOA that we’re leaving tomorrow (which surprisingly garnered us a refund for unused days) and generally taking care of things around the trailer to prepare for travel.

We did manage to go bowling again on Wednesday night, which will probably become a regular thing when we are in Nashville, at least.

David earned his green rope in the Air Force. I’ll let the astute reader do a Google on that to see what it entails. It generally signifies more leadership skills earned in training. 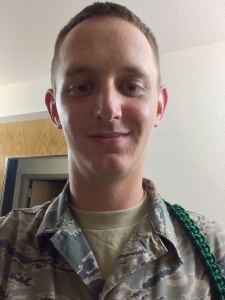 We’ve done a little modifying around the trailer. We took down the huge picture collage frame from above our bed and are going to replace it with two smaller multi-frames. Val found that the space saved with the newer frames allowed her to hang the picture she had painted the night before we left Washington.

Our next stint in Nashville is the second and third weeks of November. Malcolm went ahead and put in a reservation here at the KOA for that visit. We found out that the management is changing at the park. Should be interesting to see when we get back.