This morning we headed over to the base to see David and his classmates graduate from their training. There were seven airmen in his class for F-22 Raptor electronics specialists. Since we got there at 9:00, David took us on a tour of the training facilities. Malcolm got to climb up in the cockpit of a mockup of an F-22. 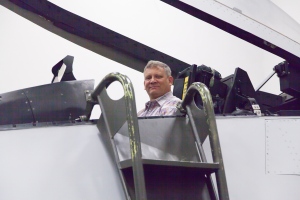 At 10:00, they had a brief ceremony in one of the training rooms where David and his classmates received diplomas and were pinned with their training pin. 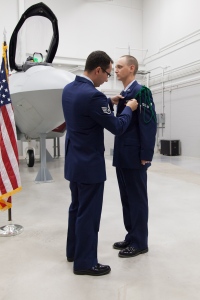 After the ceremony, and with permission of the faculty, David surprised Val by announcing that tomorrow is her birthday and he invited everyone to stay for cake. We also all sang a rousing rendition of Happy Birthday for her as well. 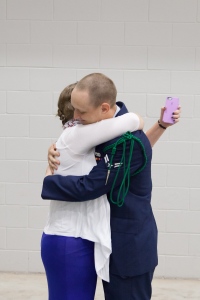 After we all had cake, David had to head back for some final class work and other wrap-up activities. Val and Malcolm headed out and stopped to eat lunch at McAlisters. We also drove around trying to find a Coleman portable grill that we’ve decided to purchase now that we know it will fit in the area where our old grill was stored (we’re currently using a Coleman stove as a grill). Nobody had any in stock, so we’re going to check when we get to Alabama or just order one from Amazon.

We stopped by Walmart and picked up steaks, baking potatoes, veggies and soft drinks. David invited all his classmates and his roommate over to the trailer for a cook-out dinner. Malcolm ran over to the base to pick up half the crew and David brought the other half in his car. We had a great time and the guys appreciated getting out for a home-cooked meal. Malcolm and David took them all back to the base around 8:00 or so (sorry, 2000 hours).

David will head out from base early in the morning and meet us at the trailer. We’ll hook up and head east from here. We plan to stop tomorrow night near Monroe, Louisiana and roll into Wetumpka, Alabama on Saturday afternoon.

One thought on “Graduation Day”