Sunday we met David at church for morning service. Afterwards, all three of us met some friends at Moe’s for lunch and talked to them for quite some time. We got back to the trailer around 3:00 or so. We had planned on heading to the golf driving range but got lazy and made up our own driving range in the large grassy area behind the trailer, using foam golf balls.

David came over after dinner and spent the night with us so that we could get up early this morning and head over to the storage units. We loaded up the truck with about half of Elizabeth’s things and headed downtown to the ABF freight terminal where they already had a U-Pack container sitting out for us. We loaded all of the first load in, locked it up and headed back to the storage place. 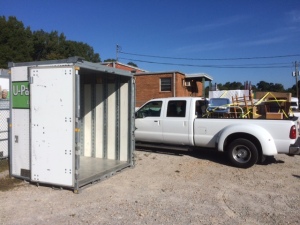 We got all the rest of her stuff in the truck in the second load and had it strapped into the U-Pack container by about noon. Malcolm let the terminal manager know we were done and he signed some paperwork saying that we had turned it over to them for shipping to Tacoma. 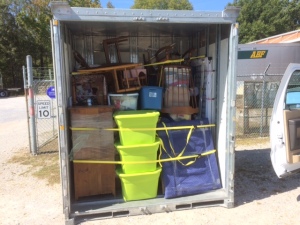 All ready to go

Back at the storage unit, we put a trundle bed frame in the back of the truck (pretty much the only thing we couldn’t fit in the cube) to take to the thrift store. We headed up to Zaxby’s for lunch and forgot to stop by the thrift store. Malcolm ran back out to do that while Val and David organized his stuff and our stuff into the larger of our two storage units.

When Malcolm got back, he helped finish up the consolidation, put the hitch and our storage totes back in the truck and stop by the office to release the smaller unit and pay a few months on the single remaining unit. We paid through the end of January. David thinks he might come up sometime and move all his stuff down closer to his base in Florida. 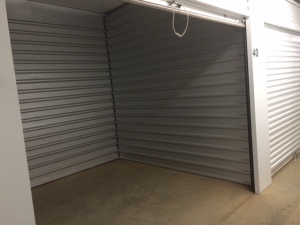 We dropped David off at the campground and he headed on to his friend’s house for the night. Val and Malcolm sat outside the trailer and sorted through several boxes of family pictures and other items so that Malcolm has a fresh batch of pictures to scan. After that, we headed over to San Marcos for dinner, then back to the trailer to flop down into our recliners.