This morning we got up on a normal schedule and got everything hooked up and ready to go by about 8:45 AM. We chatted with Nathan, the camp host, on our way out, then stopped at the dump station to empty the tanks. It was a little foggy in the campground, but much foggier as we got out toward the main road – US 231. Malcolm had originally planned on taking US 231 north towards Talladega to pick up I-59 there, but with the dense fog, we decided to do the interstate route instead.

A little fog at the campground

Fortunately, the fog wasn’t a factor after we got a few miles north of Montgomery and it was smooth sailing the rest of the way. We stopped by Camping World in Calera, Alabama to get some new carpeted step treads to replace our two-year-old ones. We also picked up an outdoor mat.

Instead of staying in the Holiday Trav-L-Park just south of Chattanooga, we decided to try out the KOA west of town in Trenton, Georgia. It is actually a nice little park set back into the woods and hills. We were originally assigned a long pull-through site out in the open (only about a half dozen sites are out in the big open area and the rest of the park is heavily wooded.

As we unhooked the truck from the trailer and started leveling it up, we were swarmed on the door side of the rig with Japanese Ladybugs – our nemesis from the last couple of years. Malcolm noted that there was a nice, long pull-through site behind us in a heavily shaded area and got our site changed with the manager. We hooked back up and backed across into the new site. We are actually backwards in the site, as the hookups are on the door side of the trailer, but the view out the door side is nicer than the view if we had pulled through the correct direction (the dumpster).

We got everything set up and Malcolm decided to put the new step covers on. He found that the latest design has a little pad glued to the back side which makes the entire cover a little thicker. The old covers were just thin enough that you could fold the steps up with a little effort. The new covers prevented the steps from folding completely up. Malcolm finally figured out we would have to leave the cover off the last step. We stowed the extra cover and left the bottom step uncovered.

Wear on the old step cover

Difference between the old (L) and new (R) covers

With the step covers out of the way, we decided to just eat dinner in the trailer and take it easy instead of trying to go anywhere. Malcolm spent the evening scanning pictures into the computer (we have an entire tote full of pictures to scan), wrote out a couple of postcards and typed in the blog.

Tomorrow we plan on going to Rock City to use our tickets we purchased about a year and a half ago (the weather then was too bad to bother going). We’ll probably poke around the area the rest of the day. We do need to stop by a WalMart or somewhere to buy some button cell batteries for a couple of the tire pressure monitor sensors. Two of them decided to die on the trailer and Malcolm swapped the batteries from the two front tires off the truck into the trailer ones to get them up and running again. 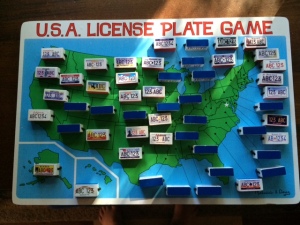