This morning Malcolm emptied the tanks on the trailer as part of the hooking up ritual. Our home for the next three nights does not have sewer hookups. It was pretty chilly this morning – around 39 degrees according to the truck. And that was nearly 9:00 AM. We got everything hooked up and rolled on out. 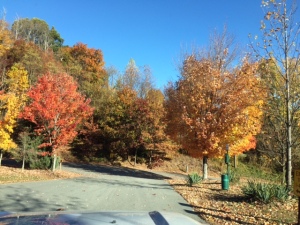 The drive was pretty uneventful but at least it was sunny today. While on the road, Malcolm noticed that one of the trailer tire pressures was showing about 15-17 pounds lower than the other three trailer tires, so we stopped at a rest area to check on it. We had to use the restroom first, though. Once Malcolm was done, he checked the tire pressure monitor system and it was now showing correct pressure. Just one of those little glitches that doesn’t happen very often.

We arrived at Cane Creek mid-afternoon and got set up in our site for the North Carolina Chapter Heartland Owners Club rally. We actually had to hitch back up and move the trailer forward on the site because the rear part of the site was fairly steep uphill and the front landing gear was fully extended even with several leveling blocks underneath. We felt uncomfortable with the front of the trailer so high in the air. Most all of the sites here are uphill or downhill, giving most of the others similar pains.

Once we were set up, we walked around and visited others. At 5:30, we all got together a convoy and drove to the home of the North Carolina Heartland Owners Club chapter leaders – Lance and Kem Duguay. Everyone brought pitch-in stuff and Lance and Kem provided Taco Salad fixin’s. It was a great time of food and fellowship. Lance was showing several of us his stereo setup in the upstairs “man cave”. It was very impressive.

Hanging out at the Duguay’s 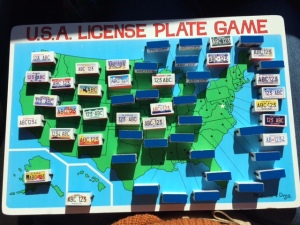