On Friday, Malcolm went to work for half a day in the morning. He headed back to the trailer and picked up Val for lunch. We had lunch, then Val dropped Malcolm off at the medical clinic to have his sinus infection looked at. The doctor gave Malcolm a antibiotic injection and a steroid injection as well as prescriptions for antibiotics and cough syrup. Val picked Malcolm back up and we ran a couple errands before heading back to the trailer.

Once back at the trailer, Malcolm took care of a few chores outside, including packing up the heated hose that wouldn’t roll up tight enough when it was cold. He also put a new tote in the basement and put our miscellaneous setup items (leveling blocks, sewer hose risers, etc.) into the new tote. It was too small for the hoses, which was what we bought the tote for to begin with. Malcolm scavenged the best parts between the water hose tote and the tote the other setup items were in and tossed the cracked pieces away.

We drove into town and met David at Cracker Barrel for dinner. He had come up from Tyndall to celebrate a friend’s birthday. We had a great visit with him, then headed back to the trailer to prepare to head further south.

This morning, we were up and moving early. We hitched up the trailer, stopped at the dump station to empty the gray tanks and headed on our way. We stopped at the Florida Welcome Center on US 231 and got some fresh grapefruit and orange juice to drink and Malcolm played with the picture kiosk in the lobby: 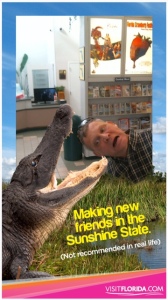 We drove as far as Lake City, Florida for the night and will head on into Tampa tomorrow. We are probably stopping by the Blue Beacon truck wash on the way and have the truck and trailer both washed.

Our spot for the night

Saw quite an assortment of license plates today – 27 of 51. 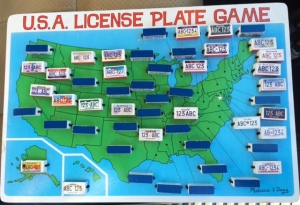