On Wednesday, we headed over to Disney’s Hollywood Studios park. Malcolm rode his favorite couple of rides – the Rock ‘n’ Roller Coaster and the Twilight Zone Tower of Terror. He used a Fastpass for each one, then went back and rode the Rock ‘n’ Roller Coaster a couple of times using the single rider line and just stood in a fairly short line (15 minutes) for the Tower of Terror. 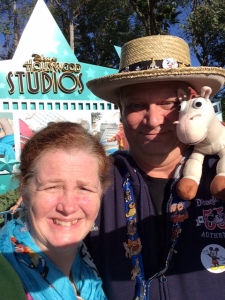 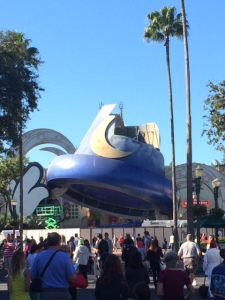 They are tearing down Mickey’s Fantasia Hat

Lunch was at Hollywood & Vine where Doc McStuffins, Sofia the First and friends were walking around taking pictures with folks. For dinner, we headed to Mama Melrose’s Italian Restaurant. 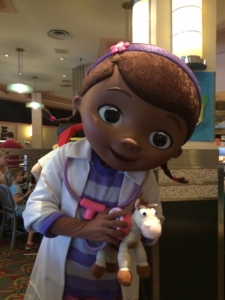 Thursday was another Magic Kingdom day. Malcolm managed to score a Fastpass for the new Seven Dwarves Mine Train ride. He declared it so-so. It is fairly tame, but fun. Lunch was a quickie meal. Dinner was at Whispering Canyon Cafe over in the Wilderness Lodge. 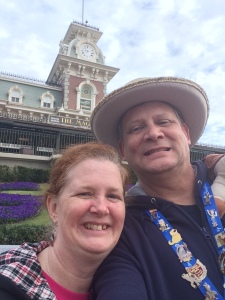 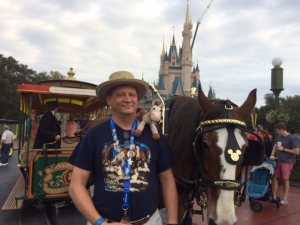 Malcolm, Bullseye and the Clydesdale pulling the street car 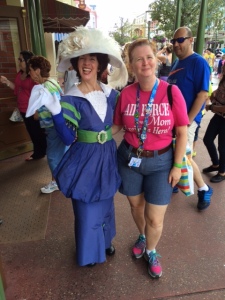 Val and a costumed cast member

Today we headed over to Animal Kingdom. The weather was calling for rain in the afternoon, but then changed to early evening, then to late evening. It actually just started sprinkling around 9:00 PM as we were walking to our trailer after hopping off the bus here in the campground. 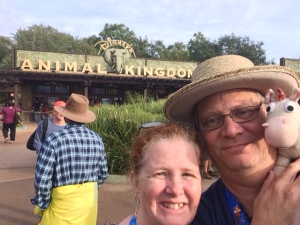 We ate a quick service lunch at the pizza place at Animal Kingdom. Malcolm rode Dinosaur and Expedition Everest on his Fastpasses (he rode the latter a total of six times, utilizing the almost hidden single rider line). We both rode the safari vehicle to see the animals. 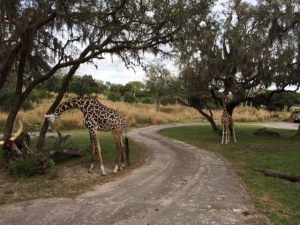 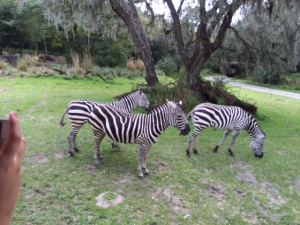 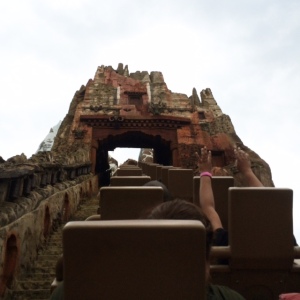 We left Animal Kingdom about 3:00 and rode a bus over to the Animal Kingdom lodges to transfer to another bus. We headed over to Downtown Disney to do some walking, shopping and dining. Dinner was at Ragland Road Irish Pub and Restaurant. We were seated at a really nice table with two big overstuffed chairs. 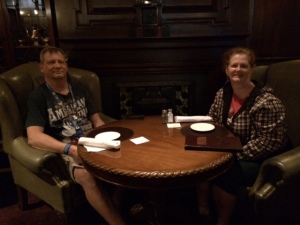 After dinner, we made our way back via bus to the campground and headed to the trailer for the evening. Tomorrow we are meeting some friends over at Hollywood Studios and hang out with them for the day. That will be our last day here as we pack up the wagon and head west on Sunday morning.