The past week at work, four of Malcolm’s co-workers flew out to San Diego for various meetings. Two were from Nashville, including Malcolm’s direct boss. At lunch one day, Malcolm mentioned that we would like to head to Wetumpka the first part of April before heading up to Nashville the end of April. That plan was okayed. So, as we continue east, we’ll stop in Wetumpka for a couple weeks of work instead of back in Nashville.

On Friday, Malcolm left the office at 3:00 and we turned in the rental car before heading to the laundromat to catch up on laundry. We ate dinner nearby before heading back to the trailer. We spent Friday evening getting some things ready to pack up for the trip today.

This morning we were lazy and got going late. Our plan was to leave between 11:00 and noon (checkout time is noon) to make the approximately 2 hour trip to Anaheim and arrive at or after the 1:00 check-in time here. After getting the trailer almost completely ready to hitch up, it was only 9:30. We ran over to Costco to pick up a couple items, then stopped by Rubio’s for an early lunch (about 10:30).

Surrounded by old VWs at Costco

By the time we hit the road, it was 11:30. I-5 traffic helped spread our time out a bit, making the 88 mile trip a 2 1/2 hour one. We got checked into the RV park here and had both air conditioners cooling off the trailer shortly thereafter. The temperature here today almost hit 100 degrees. 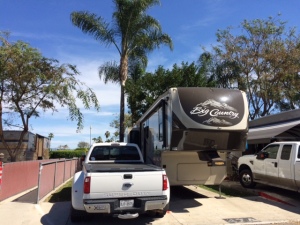 When we checked in, we bought our Disneyland tickets at the RV park for a bit of a discount ($20 off, total), so we won’t have to wait in line tomorrow at the park. There is a shuttle that picks up and drops off here, as well. We bought 3-day shuttle tickets for $12 each (parking at Disneyland is $16 a day, so we’ve saved money and hassle there, as well).

We started to take the shuttle over to downtown Disney. While we were waiting for it to get here, Malcolm checked his Instagram account and found that a family we’ve been following for a couple years now wanted to meet us at Starbucks for a quick “hello”. We hopped in the truck and met them. They are fun to follow on Instagram and also have a blog.

Dan, Marlene and their children Ava, Mila and Luka are an inspiration to young families wishing to live the nomadic life with their children in tow. They home-school (road-school) their children and have already been to the 48 contiguous states. They’re heading up to Alaska this summer to make state 49.

After our Starbucks meet-up, we said our goodbyes until later (we might get to see them again this summer as they pass through Washington on the way back from Alaska) and drove back to the campground. We hopped the shuttle bus to the Disneyland area and walked around Downtown Disney for a while. We had dinner there and bought a few gifts in the shops. We headed back to the trailer to relax for the evening.

The next two days we’ll be at Disneyland and California Adventure. We’ll post pictures.