Thursday morning, we packed up and headed out from Livingston. We had an easy drive up US 59 to Texarkana, Texas, then on I-30 for just one exit to Texarkana, Arkansas. We stopped for the night in the Sunrise RV Park. We had seen this park on the way south as we had stopped at the same exit to fuel up the truck. The place looked nice then, and it was. The park is built on the former property of a drive-in theater, so the rows are semi-circular.

We were directed to a site when we arrived and asked to come into the office a little later to pay. When Malcolm went to pay for our site, he decided to pay the additional $15 to allow him to wash the rig. He washed the trailer and the truck. The trailer was last cleaned when we took delivery in late March. The truck was last washed in mid-February, so it really needed a bath. 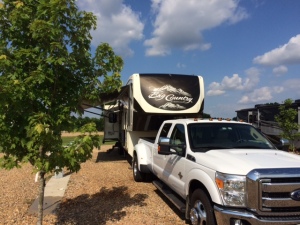 This morning we headed out early and arrived in West Memphis right at lunch time. We parked on the river row near several Heartland friends that are also ultimately heading north to the National Rally.

Set up on our site 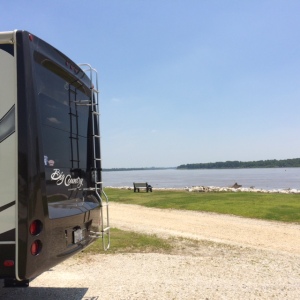 Barge traffic on the river

After lunch, we were relaxing in the trailer when Kelly and Michael Barnett dropped by to say hi and take a quick tour of the rig. After that, Malcolm did a little work before we headed into Memphis to check out the new Bass Pro Shop set up in the old pyramid stadium building.

The pyramid was originally built as a stadium for the Memphis Grizzlies NBA team in the early 1990’s. However, when the team moved to another stadium, the pyramid sat empty since 2004. Bass Pro Shop set up a store, hotel and observation deck (with another restaurant and bar) in it. The building claims to have the tallest freestanding elevator system in the world. 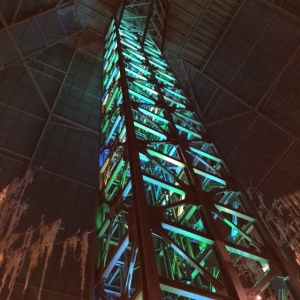 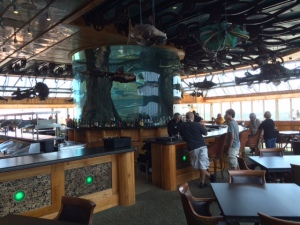 The bar (and soon, restaurant) in the observation level 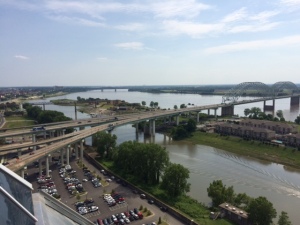 View from the top

People out enjoying the view

Death-defying look down the front face of the building (OK, not really)

We purchased a few things in the store and ran them out to the truck. We went back inside to get a table at the ground level restaurant. The food was pretty good, nothing out of the ordinary. There are several bowling lanes in the restaurant. The menu was mainly sandwich type fare.

We headed back to the campground after dinner, fueling up the truck on the way in. This evening, a small storm rolled through, knocking out power to the park. It is currently still off as Malcolm writes this, a couple hours after it originally went off. We have our Fantastic Fan running on low and a couple windows cracked open, as the air cooled off when the rain moved through. 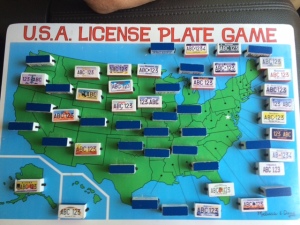