Last night we said our goodbyes to folks at the rally. This morning we hitched up and left around 7:30 Eastern time. We headed down to Nashville for the night. Since we had several packages at the Nashville office, Malcolm had one of his co-workers grab them all on Friday and take them home. We met him this afternoon and picked up the packages from him.

We got here around 4:00 PM Central time, unhitched and turned on both air conditioners. It was 90 degrees and muggy. The ACs cooled the rig off nicely. We headed out and had some Pie Five pizza for dinner before picking up our packages and heading back to the trailer via a gas station to fill up the truck.

Tomorrow we’re heading down I-40 towards Little Rock, then I-30 towards Texarkana, stopping somewhere along the way for the evening. From there, on to Houston on Tuesday.

Two of our packages contain items for a modification that Malcolm is working on. We’re replacing the stock white plastic speakers on the ceiling with Bose speakers. Malcolm mounted and hooked up the center channel speaker this evening so we can see how it rides from here to Houston. 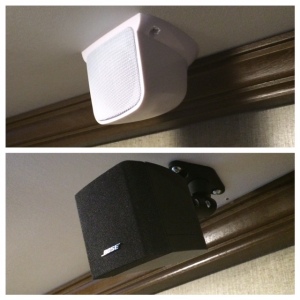 Speaker before and after