We were up and going this morning about normal time (8:00 or so pulling out). We’ve been having a little trouble getting our off-door slide to come in (more on that later), which put us behind a little bit. Malcolm tried a couple adjustments before we left the campground, but those didn’t help. We got everything going and headed down the road.

Last night, when driving to the gas station to fuel up, the low Diesel Exhaust Fluid (DEF) warning came on. It gives you 500 miles to put more DEF in. We decided to just stop in a truck stop along the way and use the bulk DEF pump today. We did that about 40 miles down the road. Malcolm paid for the DEF and what little fuel we needed after a short hop.

The truck still said the DEF was low (even though it appeared to overflow when filling it). We stopped later at another truck stop and Malcolm bought a 2 1/2 gallon jug of DEF and poured just a couple ounces in before it, too, overflowed the filler neck. Malcolm put the jug in the back of the truck and decided we would probably have to have the truck looked at somewhere. Once re-started, the truck decided it was happy that the tank was full and the warning went away. Oh well.

We arrived at the campground here in Barnesville, which is run by the city. You pick up an envelope on the way in, find a spot and set up, put your money in the envelope and drop it in the box at the entrance. Our fee for one night was $22, which is a bargain for 50 amp electricity, water and sewer hookups. The park is nice and quiet and well kept.

Malcolm adjusted the bolts on the slide ram which limits how far the ram will push or pull the slide mechanism. He set the adjustment so that the slide ram gets to its full extension before it can push the slide past the roller. After a few tests of running the slide in and out, Malcolm declared it a success. We’ll keep an eye on it to see if there are any further adjustments needed in the future.

Tomorrow, we head on to North Dakota, which will be our last new state this trip (and probably this year). Our son-in-law has been keeping us up to date on the wildfires around Lake Chelan, Washington, which is where they are headed this weekend and where we are headed on Sunday. Hopefully, the fires and smoke will dissipate by then. 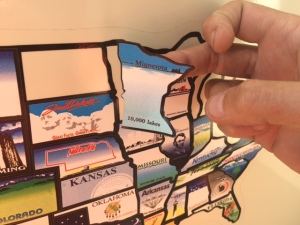 Adding Minnesota to our map