Where have the Talleys been, you might ask. Good question. Here’s a stop by stop breakdown since we left Walt Disney World.

We spent three nights at Space Coast RV Resort near Melbourne, Florida. While there, we visited with some friends of ours, Nigel and Heather and their son. They had us over to their house for dinner on Monday evening. We stayed and visited for quite some time before heading back to the trailer. On Tuesday, while Malcolm was working in the trailer, Val headed out to the store and met Heather for lunch.

On Wednesday, we headed on down the road to Sunshine Travel RV Resort in Vero Beach, Florida. We stayed here for just an overnight. It was a pretty nice gated RV resort. We pretty much just sat around and relaxed. Malcolm got in some work after we arrived.

On Thursday, we packed up and headed on down to  Jonathan Dickinson State Park near Hobe Sound, Florida. We took time after we got there to take their self-guided tour. They gave us a map and a CD that told about each stop in the park. Back in the 1940’s, the area was a top secret Army installation where they held radar training. The base was abandoned near the end of World War II and the land given to the state for the park.

It’s a really nice park with a great campground, a bunch of bike trails (both on and off road) and several other activities to enjoy, including horseback riding stables. This is one park we’d like to come back to. It is booked up all through the winter and we were able to luck upon this one night when we were planning our trip.

On Friday, we headed northwest to the Okeechobee area and stayed for two nights in the Okeechobee KOA. This KOA has its own 9 hole golf course and driving range and our site backed up to the fairway for the first hole. Sadly, the weather was not conducive to golf either day we were there. There was a ton of rain the day we arrived and a lot of wind the next day. Fortunately, the weather settled down by the time we left on Sunday, or so we thought.

Our trip on Sunday to the Fort Myers area was driving through a bunch of rain that fortunately let up by the time we got to the  Pine Island KOA, near Saint James City, Florida. This was our least favorite campground the whole trip and ranks pretty low on all the campgrounds we’ve ever stayed in. It was very tight and they put us in an awkward, pie-shaped lot on the outside of a curve in the road.

Between all the rain on Sunday, and again on Tuesday and Wednesday, our parking area was a muddy mess. Though it was fairly level, we still had to use four-wheel-drive to enter and exit. The power in the park was sketchy and, during one night’s rain, kept going out after something nearby was shorting out the system and throwing a bright white arc. We were glad we installed an electrical management system.

Aside from our crummy campground experience, we did get to do most all of the sightseeing in the area that we wanted to do. Malcolm’s grandparents used to winter in the Fort Myers area for years and when we’d go to visit with them, they’d take us to various places that we ended up re-visiting on this trip. (For all the family, yes we did drive by Orange Harbor a few times, but didn’t drop in to see the place).

Various trips out included visits to the Thomas Edison and Henry Ford winter estates, The Shell Factory, Manatee Park, Sanibel Island and Captiva. We took some time while on Sanibel to walk out to the beach and dig through some shells. On the way back to the south end of the island to visit the lighthouse, we got stuck in traffic. Stuck as in not moving for huge amounts of time. We subsequently found out there had been a bad wreck on the causeway between the island and mainland and traffic was at a halt. We took that time to eat dinner at a nearby restaurant and walk through what few shops were open late in the afternoon or early evening. Traffic finally started flowing after 7:00 PM and we headed on out with the crowds back to the house.

We also met with some Heartland RV owner friends of ours who are wintering in the area – Bill and Susan Mealer. We went out to dinner with them on Saturday evening to Alva Country Diner. They served great country cooking and plenty of it.

In other news, we decided to install a washer/dryer combo in our rig. We picked it up today and installed it ourselves. Fortunately, only two runs were required to pick up more tools or parts. One was to Home Depot to get a 4″ hole saw for the dryer vent hole and some plumbing supplies for the drain line for the catch pan. The other was a quick trip to WalMart to get a longer dryer vent hose. Everything installed smoothly and worked great once completed. Rather than showing a whole bunch of in-progress installation pictures, here’s a picture of the completed installation. 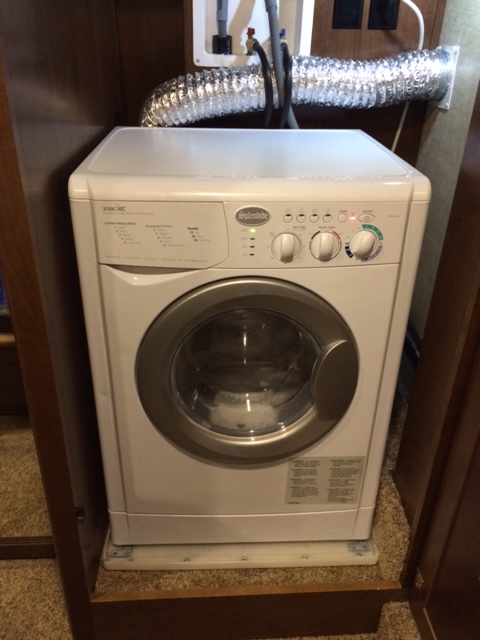 We also removed the clothes hanging rods in one side of our closet and installed this wire rack drawer unit from The Container Store. Again, a completed picture: 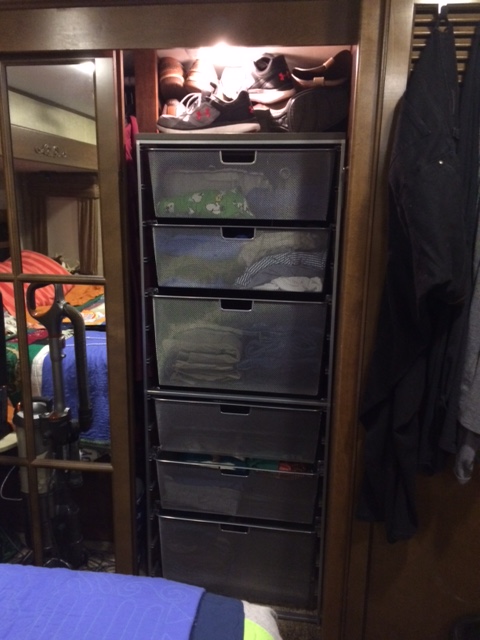 We’re still organizing clothing a bit, but putting a lot of stuff that was on hangars (for lack of drawer space) into drawers helped out quite a bit.