OK, so we haven’t posted anything again for a while. With our actual travel season starting up in earnest, we’ll try to change that behavior. Part of the reason for the longer updates is that it seems more like we’re just kinda hanging around. Malcolm works more in the trailer now, so it’s easier to just sit still somewhere and fall into an everyday routine.

The first week we were here (after arriving May 16th) was mainly some of that everyday stuff. Malcolm worked remotely from his easy chair, or on occasions, from his outdoor office under our canopy.

Val did some various craft projects, including a handmade doll for our youngest granddaughter, Scarlet. The doll is seen here making friends with Bullseye the traveling horse. 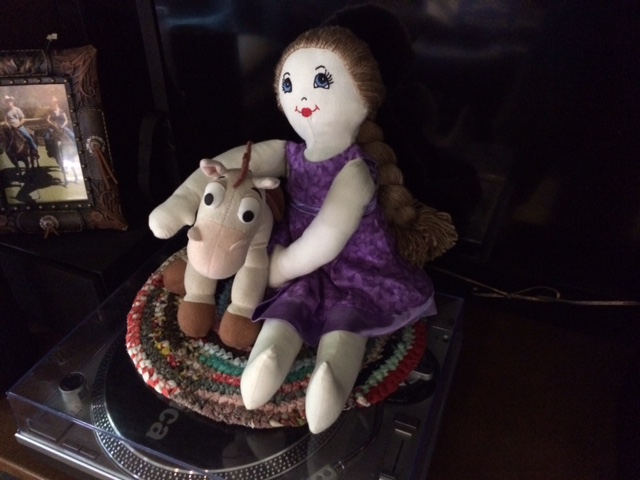 Another craft project was started, this time by Malcolm. While rooting through our storage unit, we pulled out a scrapbook that Malcolm’s mother had started and put a lot of his things into. It was showing its age, so we decided to re-do the scrapbook using more modern materials. Malcolm pretty much did all the work and has even typed up some little blurbs for different pages to explain items and to give some historical recollections.

Page in the scrapbook

Malcolm came down with a sinus infection over the first weekend we were here and ended up at the local “doc in the box” to get looked at. He let them give him a steroid shot while he was there, knowing it typically hypes him up. It gave him that needed boost to finish about 75% of the scrapbook work through the night. Next time, no shots.

Our son David came up this past Thursday and stayed with us until this morning. He invited a few of his friends over on Saturday afternoon to celebrate Memorial Day weekend. We did the same. We cooked out, enjoyed each others’ company, had dessert with some of the other campground folks and some of David’s friends stayed well into the evening chatting with David in the trailer. 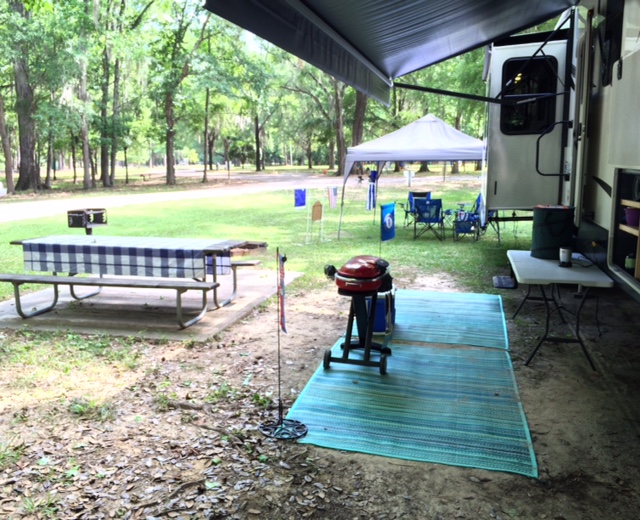 We recently purchased a new “honey wagon” (sewer tote) for when we stay here at this particular campground since they don’t have sewer hookups. Since we are in one of the closest spots to the dump station (it is off in the distance above the picnic table in the picture, above), we decided to just use it more frequently to empty the gray tanks as needed so that we wouldn’t have to conserve our water usage. 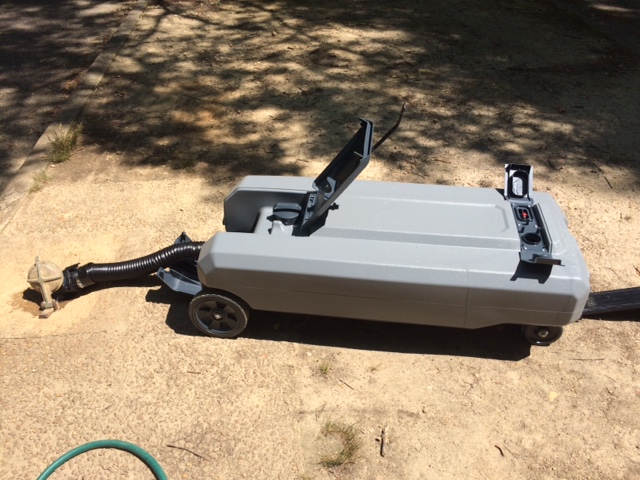 That made it particularly nice as we were able to keep up with laundry using the washer/dryer in our trailer. Malcolm made maybe five runs to the dump station (we would have made at least three without running the washer). He uses it as his “exercise” since pulling the tote to the dump and back by hand isn’t too difficult.

Today we said goodbye to David (for a day or so, since we head to Panama City next) and spent part of the day putting all the outside gear away. We dropped off our sewer tote (we only run gray water through it) and some extra items at our storage unit, and brought back a couple boxes of stuff we stored in there to keep them out of the way while we had company this weekend.

Tomorrow morning we head down to Panama City (Beach) for a couple days to drop some things off for David. Then we’ll head east to I-95 and make our way up the eastern seaboard to eventually end up at a Heartland Owners Club rally in the Washington, DC area.