We packed up and left Panama City Beach this morning, heading east to the coast, then north. We ended up stopping just over the Georgia border for the night. When we were about five miles from our exit, it started raining really hard. Like, slow down to 45 mph on the interstate and put on your flashers hard.

Malcolm went and checked in by running through the rain with his umbrella. It was still raining (did we mention thunder and lightning?) as we pulled into our site. We finally just sat in the truck (Malcolm) or trailer (Val) to wait out the worst of the rain before we finished setting up. The storm was part of a line of late afternoon pop-up thunderstorms. Before we drove into them, the truck said it was 95 degrees outside. Afterwards, it was 75. So, there was that.

All set up in our site. Rain moved away.

Once set up, Malcolm drove over to a nearby gas station and filled up the truck with fuel. We drove about the longest safe distance we could on one tank today (327 miles). The low fuel warning came on as he started up the truck to go fuel up.

Once back, Malcolm did some work until dinner time. We had grilled pizza for dinner. It came out really well. We used pancake mix (instead of Bisquick) for the crust, which worked out great. The remaining toppings were Ranch dressing, cubed chicken, green onions and bacon bits. It cooked up really well on the grill and was very tasty. 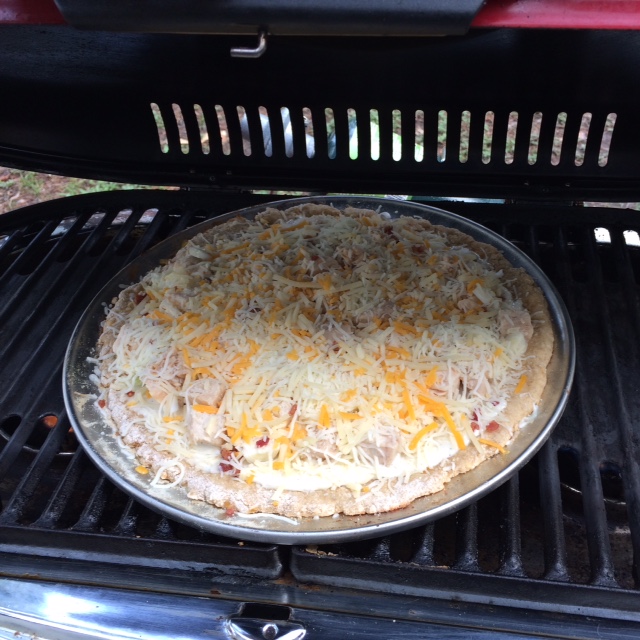 We walked around the campground after dinner and stopped by their store to pick up a t-shirt for the t-shirt quilt. We checked on postcards, but they didn’t have any.

Tomorrow (after free pancakes and waffles), we’ll head on up the road to our next reserved overnight stop in Lumberton, North Carolina.

Edited to add: After posting this blog entry, Malcolm looked through his spreadsheet of all known places that his grandparents stayed on their full-timing journeys and found that they had stayed at this campground on several occasions (typically between Ft. Myers, Florida and Durham, North Carolina).