We arrived at the Newport News Park Campground around 1:00 on Wednesday. We were instructed to drive around, find a site we liked, call the office to make sure it wasn’t reserved and pull on in. We ended up in the same site we stayed in a couple years ago, site #31 on the B loop. It’s a really nice site overlooking the woods. 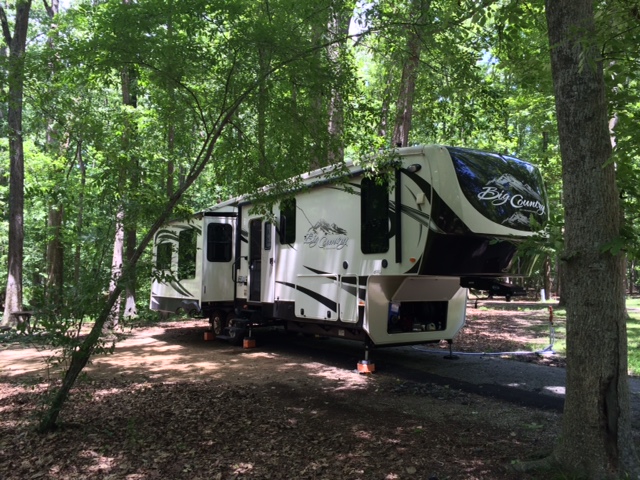 Our view out the front door

After we got set up, we drove up to Williamsburg to do a little shopping. The campground is only a few miles away, so it makes for a nice drive. After Williamsburg, we headed down into Newport News to go to Costco to grab some things we needed. We ended up eating dinner at Mellow Mushroom since dinner was still frozen at the trailer. Once back at the trailer, we enjoyed the cool weather by opening the windows and turning off the air conditioning.

On Thursday, we drove over to Busch Gardens amusement park for the day. Since school is still in session locally (and probably elsewhere, as well), the park was not crowded at all. Malcolm got to ride all six of their rollercoasters (some more than once) and never had to wait more than about 5 minutes for each one.

We paid for Fun Pass tickets, which allow us to return as many times as we want by September 5, 2016. They were the same price as a single day ticket to the park. We may not be back this summer, but no money lost. If we do come back, we only pay for parking ($15) and can enjoy the park for free.

The park is divided into areas themed around different countries. We liked Ireland, and saw a really nice entertaining show there in the afternoon. It was a good break from all the walking around.

Today we made an appointment to get the truck serviced (oil change) at a local Ford dealer. We took things to keep us busy, which was a good thing, as they were busy. It took about an hour and a half to get the truck through. They had free wi-fi, so that helped. 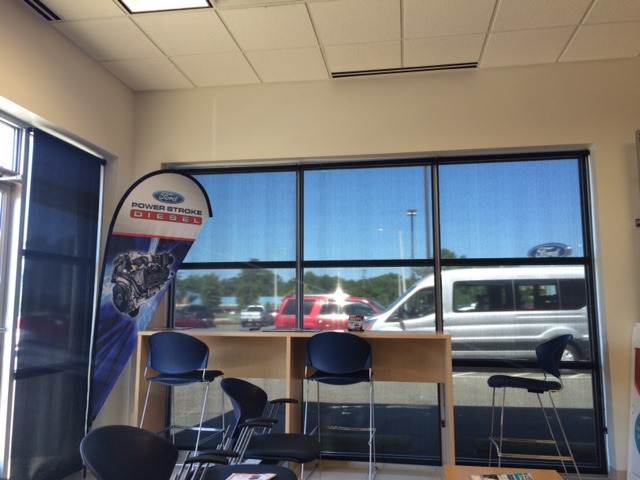 At the Ford Dealer

After we left the Ford dealer, we headed up to visit Historic Jamestowne. It was a very interesting history there. There is also active archaeology dig going on right now. We ate lunch at the restaurant on the grounds. It was really good food and a good price. We wandered around for a while before heading back to the truck. We also drove over to the Jamestown Glasshouse, which is a replica of an old glass-blowing factory that was built nearby.

Here are some pictures from around Jamestowne.

Memorial to Jamestown, built when the park was dedicated around 1907 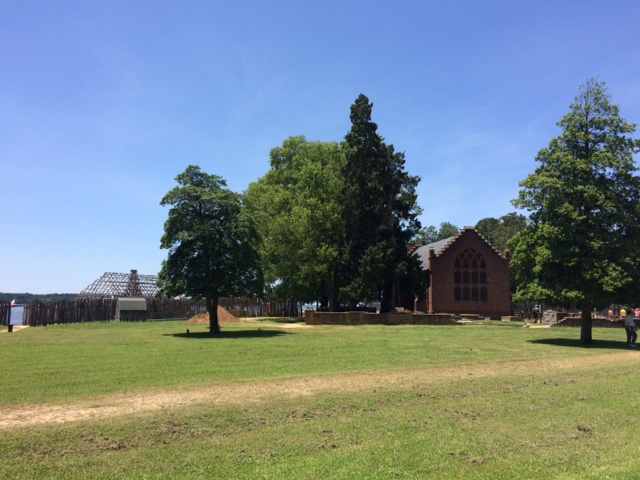 Church built on the grounds around 1907, on the same site a church would have been there many years earlier

After visiting Jamestowne, we stopped back through Williamsburg just to walk around a bit and pick up a couple gifts. We also stopped into a pub to have a quick drink and a snack. Afterwards, we stopped by a grocery store in Williamsburg to grab some groceries.

It was a good thing we had the cold food in an insulated bag, as an accident on I-64 had traffic stopped for miles. We ended up getting back off the interstate and traveling slowly on US 60 for a few miles before it opened up. It took us about an hour and a half to get back to the trailer from Williamsburg – about an 8 mile drive.

Once back at the trailer, we put the groceries away and had leftovers for dinner. Malcolm got a little work in afterwards.

Tomorrow  we’re going over to Malcolm’s aunt and uncle’s house to visit with them and with Malcolm’s cousin who has been in Richmond with bone marrow treatments and therapy for the last six months. The whole family is getting together tomorrow afternoon for dinner.